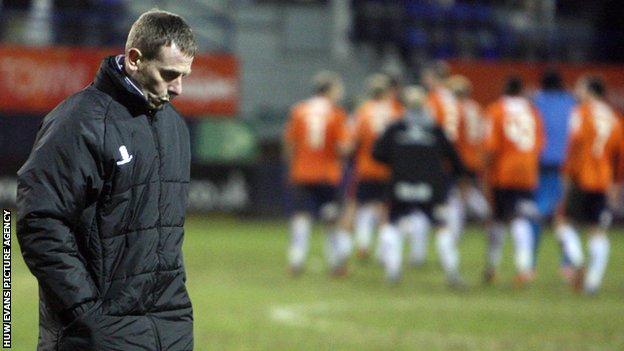 Caretaker manager Billy Barr has warned Wrexham are in danger of being pulled into a relegation battle.

But the Dragons, who have won only one of their last eight games, are only 10 points clear of the relegation zone.

"The glass is always half full with myself but the realism is that we're not winning games," Barr said.

"We can't get into a position where we just expect that we'll get enough points because it won't just happen.

"Nobody in this league is going to give us anything.

"We've got to make sure that with nine games to go we've got to find a run of form from somewhere to relieve us of that pressure."

Wrexham dropped to 17th in the Conference Premier table after Saturday's loss at play-off hopefuls Grimsby.

Scott Neilson had given the Mariners the lead before Shaun Pearson's own goal brought the Dragons level at the end of the first half.

Barr's side held their own in the second half but late goals from Craig Disley and substitute Andy Cook secured victory for Town.

The caretaker manager admits Wrexham players are lacking in confidence and is keen to add new faces to the squad.

"I think you see we do need players in there even if it's just to brighten the place up," Barr said.

"We're struggling at the moment to really create and hold at the top end of the pitch.

"Is it through lack of effort? No, but it's that confidence issue with everybody and that's when something can go wrong it seems to be."