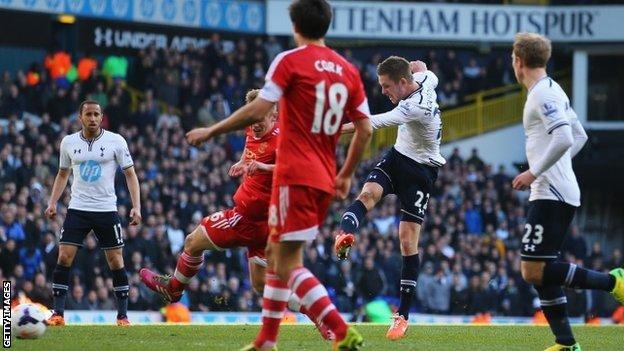 Gylfi Sigurdsson scored a late winner as Tottenham dragged themselves back from two goals down to earn a thrilling victory against Southampton.

Southampton dominated the first half and a Kyle Naughton mistake allowed Jay Rodriguez to score.

Adam Lallana doubled Saints' lead with an impressive strike into the corner.

Tottenham's spirited comeback will ease the pressure slightly on manager Tim Sherwood, who has seen Dutchman Louis van Gaal linked with his job.

Sherwood's side, knocked out of the Europa League by Benfica on Thursday, had endured a poor run of form of late - losing three and drawing one of their last four matches in all competitions - but this victory will reignite their hopes of finishing inside the top four.

Qualifying for the Champions League will still be a tough task as fourth-placed Arsenal are six points ahead of their north London rivals in fifth and have a game in hand.

However, this was the first time Spurs had bounced back from a two-goal deficit since their 3-2 win against Arsenal in November 2010, and a gritty turnaround against ninth-placed Southampton will boost confidence.

Tottenham manager Sherwood watched the opening 30 minutes from the directors' box, saying it gave him a "better view" while also alluding he hoped it would help him keep his emotions in check.

By the final whistle, Sherwood was on the touchline and unable to contain his delight as Sigurdsson's 92nd-minute 20-yard winner sparked wild celebrations.

From the stands, Sherwood - and the watching England manager Roy Hodgson - would have noticed Lallana imposing himself on the match in the first half, finding holes in Tottenham's high defensive line with his customary panache.

But for all of Southampton's creativity, their opening goal came thanks to a long ball from their goalkeeper Artur Boruc and a defensive blunder.

Tottenham's Naughton let the ball bounce and it was left for Rodriguez to impressively finish low into the corner for his 13th league goal of the season - and his third in as many games.

Less than 10 minutes later Southampton had doubled their advantage and, once again, it was Naughton at fault. The defender tamely poked the ball towards Rickie Lambert, whose quick feet released Lallana to score his first league goal in seven games.

By the time Tottenham had halved the deficit, Sherwood was already by the dugout, gesticulating at his players.

Again, it was a defensive error which led to the match's third goal, with Nathaniel Clyne diving wildly at a Naughton cross to present Eriksen with a simple tap-in.

Tottenham posed more of a threat as half-time approached and both goalkeepers were required to make point-blank saves; Hugo Lloris preventing Lallana and, at the other end, Boruc stopping Eriksen from levelling before the break.

But Boruc was helpless when Eriksen did equalise a minute into the second half.

The industrious Roberto Soldado won the ball from Dejan Lovren near the corner flag and passed across goal for the onrushing Eriksen to once again score from close range.

Southampton's threat faded quickly and, if the first half belonged to Lallana, it was left for Eriksen to conduct proceedings after the break, with the Dane scoring twice in a match for the first time in his career.

Eriksen had a chance to complete his hat-trick after being put through by a Younes Kaboul long ball, but the Southampton defence did enough to unsettle the former Ajax playmaker.

Eriksen's strike remained the only shot on target in the second half until Sigurdsson's low effort hit the net in a rousing finale.

Southampton manager Mauricio Pochettino: "The first half we dominated but there's refereeing decisions which did not go our way and completely changed the dynamic of the game.

"We suffered after conceding the equaliser and the last goal made it very difficult for us. There's nothing to complain about the third goal. We lost the game, more than Tottenham won the game, and they had a little help from the referee."