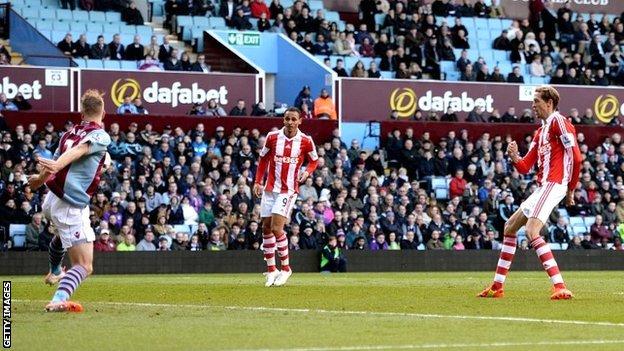 Stoke earned a first Premier League away win since August after coming from behind to comfortably beat Aston Villa.

But two Stoke goals in four minutes transformed the game as Peter Odemwingie finished on the run before Peter Crouch scored from close range.

Steven Nzonzi made it 3-1 before the break with Geoff Cameron grabbing a fourth goal in the 90th minute.

Four for the road

The 37 points Stoke have achieved this season under boss Mark Hughes should secure their survival in the top flight for another year.

But the Welsh manager, appointed last summer, has targeted an improvement on Stoke's best Premier League finish in 2010 and they are now 10 points off that record.

The performance was yet more evidence that his team have evolved under his stewardship as they recovered from a slow start to out-pass and out-wit their opponents.

By continuing their good form, which has seen them lose one of their last eight Premier League games, they moved above Aston Villa to 10th place in the table.

Their second away win in the league this season also added to home victories over Chelsea, Manchester United and Arsenal.

Paul Lambert's side failed to match the intensity they achieved in beating league leaders Chelsea last weekend and they were inhibited by first-half injuries to Karim El Ahmadi and Andreas Weimann.

They began where they left off in that tempestuous win over Jose Mourinho's side by taking the lead after five minutes and the goalscorer in that game, Delph, was involved again.

The Villa midfielder latched on to Ryan Bertrand's pass ahead of Cameron and cut the ball back to Benteke, who expertly found the roof of the net for his sixth goal in his last 10 games.

As the hosts chased three successive home wins for the first time since 2007, the mood inside Villa Park was buoyant.

But Stoke kept their composure despite being without Stephen Ireland, who has a clause in the contract he signed in January which prevents him playing against former club Villa.

After Odemwingie had served a warning with a shot that deflected just over, they went ahead with two quick-fire strikes.

Nigerian striker Odemwingie grabbed the first, after chipping the ball up to Crouch, taking the return and holding off Bertrand to find the bottom corner.

Crouch then got in on the act against his former club by tucking in Erik Pieters's cross after the Dutch defender latched onto Marko Arnautovic's back heel.

It got worse before the break when a fine spate of passing from the visitors led to Nzonzi's strike from the edge of the area although Nathan Baker had a chance to intercept Arnautovic's through ball.

Boos rang round Villa Park at half-time and although Delph tried to galvanise a response with some surging runs, Stoke kept the hosts at arm's length.

Odemwingie drew a decent stop from Brad Guzan but after the glut of goals in the first half, the second period failed to reach the same heights until Cameron raced forward to steer home another cut-back from the excellent Arnautovic.

Aston Villa boss Paul Lambert: "We were second best if truth be known. We started well but it wasn't good enough. We didn't deserve to get anything from the game. The goals we lost, were really poor from our side.

"In a strange way when the bigger teams come you are naturally up for it anyway but when you play teams in and about you it becomes reality. These games can be more difficult because of the nature of that but that wasn't good enough."

Stoke boss Mark Hughes: "It's been a long time coming to be honest, but it was worth waiting for. Albeit we had a poor start, but after that it was exactly what we needed. We showed personality, we got on the ball, knocked it around but the difference today was we had a cutting edge.

"I think the third goal had 16 or 19 passes before we stuck the ball in the net so maybe that was an indication of what we are trying to do. We have seven games left, we have realistic targets about what we want to achieve this season."