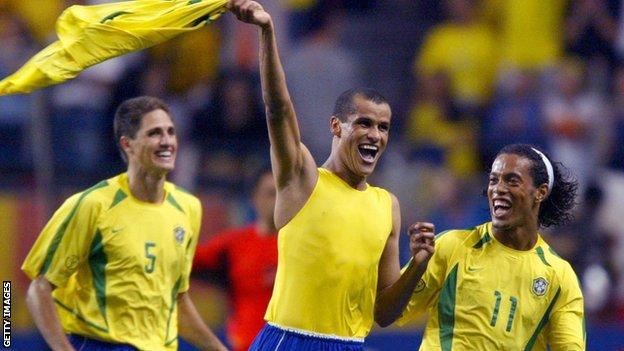 The 2002 World Cup winner was playing for Brazilian third-tier side Mogi Mirim, where he is also club president, alongside his son Rivaldinho, 18.

"My history as a player has come to the end," said Rivaldo, who was named the 1999 Fifa World Player of the Year.

He is best known for his five-year spell at Spanish giants Barcelona between 1997 and 2002, but also represented another 14 different clubs across six countries on four continents.

"With tears in my eyes today I would like to thank God, my family and all the support, the affection that I received during those 24 years as a player," he said in a statement on social networking site Instagram.

"I have to thank the lovely career I have built over these years. There were many obstacles, challenges, waivers, longings, disappointments, but there were much greater joys, achievements, growth, change."

He spent one season at Deportivo before earning a switch to Barcelona, where he won two La Liga titles and a Copa del Rey crown, along with a host of personal accolades.

Rivaldo's most memorable Barcelona game came at the end of the 2000-01 season when he scored a hat-trick, including a late bicycle kick from the edge of the box, to beat Valencia 3-2 and clinch a Champions League place.

On the international stage, he helped the Selecao win the 1999 Copa America and the World Cup three years later.

Infamously, Rivaldo was also fined £5,180 in Japan and South Korea for feigning injury during the Group C win against Turkey. He admitted fooling the referee by clutching his face after Hasan Unsal kicked the ball at his leg while he was waiting to take a corner.

Despite predominantly playing wide or behind a striker, he managed to score 136 goals in 253 appearances for the Catalan giants before leaving for Milan in 2002.

He helped the Rossoneri win the Champions League and Coppa Italia in his first season, but was released in December 2003 after falling out of favour.

Stints at Greek sides Olympiakos and AEK Athens, Uzbek club Bunyodkor and Angolan outfit Kabuscorp followed, before ending his career back in Brazil.