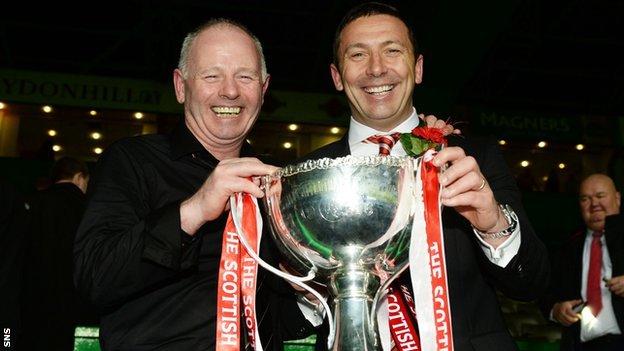 The Dons had endured a trophy-free spell since winning the trophy in 1995.

"These supporters deserve some success," McInnes told BBC Scotland after the win over Caley Thistle following a penalty shoot-out.

"But none more so that the chairman, who is our biggest supporter. He has put so much into it."

Milne handed McInnes a contract extension in the days leading to the final and the manager was delighted to repay the chairman's faith in him.

"It is brilliant for him," said the manager. "A lot of people at the club, the chairman included, have had to endure. It has not been easy the last wee while."

Neither side was able to break the deadlock during an exciting, high-paced game played in an electric atmosphere at Celtic Park.

"We got the best of the first half in terms of controlling it and opportunities, but the second half and extra-time was very even.

"We have won a tight, fiercely contested match and we've shown enough bottle and composure at the penalty kicks.

"Everybody's doubted whether we can do this, but we've handled it every time there's been a question mark hanging over us."

Aberdeen's Peter Pawlett missed out on the final through injury and fellow winger Jonny Hayes had to be substituted with a collarbone injury after four minutes.

McInnes thought his side had missed the "dynamic" duo, but captain Russell Anderson was hopeful they would both be fit for the forthcoming Scottish Cup semi-final.

The 35-year-old defender is in his second spell at Pittodrie and hoped that ending their long wait for a trophy was a signal that the club was emerging from the doldrums.

"I think everybody was expecting 25-30,000 fans to come here with us, but to get 40-odd thousand is incredible and definitely helped us," said Anderson, whose side also lie second in the Scottish Premiership.

"It is the first step in what we hope will be more successful times for Aberdeen.

"It has been a long time waiting for it, so we just need to kick on now."