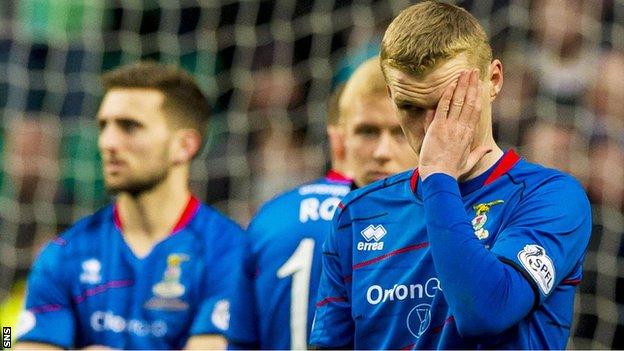 Manager John Hughes feels Inverness should have had a spot-kick before they eventually lost the Scottish League Cup final on penalties against Aberdeen.

Inverness lost 4-2 in the shoot-out after a goalless 120 minutes.

But Hughes feels Andrew Considine's challenge on Richie Foran should have resulted in an Inverness penalty.

The boy certainly pushed Richie and it was disappointing not to get that," Hughes told BBC Scotland.

"That's part and parcel of football; some you get, some you don't.

"It's not sour grapes. Aberdeen were the better football team.

"I felt the referee had a right good game. He brought a good rhythm to the game."

There were few chances during regulation or extra time, with Aaron Doran closest to scoring for the Highlanders when his shot was beaten away by Jamie Langfield.

Langfield blocked McKay's penalty in the shoot-out before Greg Tansey lifted his over the bar.

And though Nick Ross and Doran found the net, four successful kicks by the Dons gave them victory.

"I feel for the boys that missed," reflected Hughes. "We have to pick them up and get going again.

"Tactically we were solid. The shape was good, the game plan was working a treat.

"We didn't have enough, really, to go and work Jamie Langfield. That was disappointing.

"But, every one of them to a man are absolute heroes. To get to a national cup final, I really take my hat off to them.

"We just need to lick our wounds and get on with it.