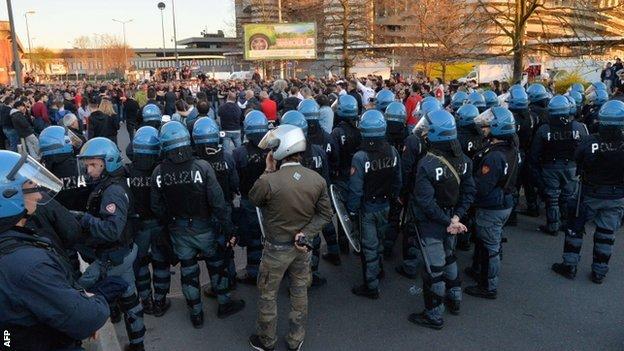 AC Milan coach Clarence Seedorf and some of his players met an angry group of the team's ultra supporters following the 4-2 home defeat by Parma.

Mario Balotelli and Kaka are thought to be among the players who met the fans in a room inside the stadium.

Approximately 300 fans waited outside the entrance pre-match and protested when the team bus entered the stadium.

They also left part of the San Siro stadium's Curva Sud empty in another protest at the team's performances.

Milan fans are angry with the team's campaign after they dropped to 12th in Serie A and were knocked out of the Champions League following a 4-1 defeat at Atletico Madrid on Tuesday.

Former Netherlands international Seedorf replaced Massimiliano Allegri as Milan manager in January and enjoyed an encouraging start to his reign, but three straight league defeats have left their season on the verge of collapse.

Seedorf's side have lost their last four games in all competitions.

"It was a very peaceful meeting, nothing in particular," former Milan midfielder Seedorf told Sky Sport Italia. "After two years of suffering, they wanted to express their feelings.

"I just went to watch. There is great respect for the Milan shirt on the part of everyone. Sometimes it helps just to listen and give the fans a voice, so they know we hear them.

"I experienced something similar when I was at Botafogo [in Brazil]. If they feel the fans are helping, the team will react."

Chief executive Adriano Galliani, criticised for the club's recent signings, and Balotelli was among the targets of the protests.

"Of course it hurts, especially as people ought to remember this team's past," Galliani said before the game. "Over the last decade we've been the only Italian side regularly in Europe.

"I am disappointed and I certainly don't like to see the fans against the team and part of the club, but I continue smiling."