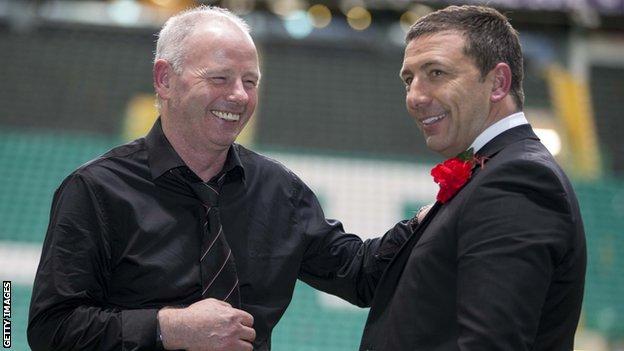 Derek McInnes is building an Aberdeen team to challenge at the top of Scottish football, according to the club's chairman.

"I think we've got a special manager and a great management team," Milne told BBC Scotland.

"They're starting to build a team that's hopefully going to take us back to the right end of Scottish football."

The Dons, who took 40,000 fans to Celtic Park for the final against Inverness CT, won 4-2 on penalties following a nerve-shredding 90 minutes plus extra time.

It was the club's first silverware in 19 years and they will seek to add the Scottish Cup to their haul before the end of the campaign.

And Milne is delighted with the performance of McInnes, who recently signed a new two-year contract extension.

"Fantastic; 19 years, 120 minutes and penalties," said Milne. "It was just a massive relief for everyone. What an occasion.

"To walk out. I don't think I've been as emotional in my life, seeing 40,000 fans in this fantastic stadium.

"They stuck behind the team all the way through. They were definitely the 12th man.

"It's a progression of what we've been doing all season.

"Derek and [assistant] Tony Docherty have done a fantastic job over the course of the season. I think they've got the team really believing in themselves. Every game they go out to play they believe it's a game they can win.

"I was no different from many of the fans, when it goes to penalties you just never know which way it's going to go.

"They did a lot of preparation for the penalties as well. That's a measure of the whole approach and attitude within the team.

"I think we've got a special manager and a great management team.

"They've put together a fantastic backroom staff as well and are starting to build a team that's hopefully going to take us back to the right end of Scottish football and sustain us there.

"That's what all the fans want to see. It would be fantastic if we ended up back here [at Celtic Park] for the Scottish Cup final.

"I don't think anyone at the club thought we'd bring anything like 40,000 fans, it's a special moment for me and for everyone that was here."