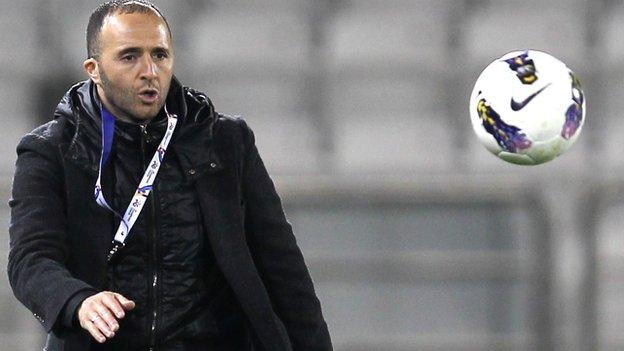 Algerian Djamel Belmadi has been installed as the new coach of Qatar's national team, the country's football association has revealed.

The 37-year-old takes over from Fahad Thani, who has been placed in charge of the Olympic squad.

And in January he led the Qatar junior to glory at the West Asian Football Federation Championship.

MAN ON THE MOVE

Belmadi played in France, Spain, Qatar and also had spells in England at Manchester City and Southampton

However, his appointment is something of a low-key move by Qatar, who will be firmly in the spotlight in 2022 when they host the World Cup.

"This is a great opportunity for me to take charge of a very talented squad," Belmadi told the Qatar Football Association's website.

"This is a responsibility that I have taken up after considerable thought. I did not go out looking for this job.

"I have been in this country for 10 years. I know how important this sport to Qatar and the football fans. We have many targets to achieve," he said

Sheikh Hamad said: "Our targets are easy to understand. We want to reach the finals of the 2018 World Cup to be held in Russia.

"I take this opportunity to thank Fahad Thani for his wonderful contribution. He took over at a difficult time and did his best (2012 to 2014). We have important events coming up like the Gulf Cup and the 2015 Asian Cup."

Fahad had replaced Brazilian Paulo Autuori in February 2012 after Qatar were knocked out of the 2012 Gulf Cup in Bahrain. Under Fahad, Qatar failed to reach this year's World Cup finals in Brazil.