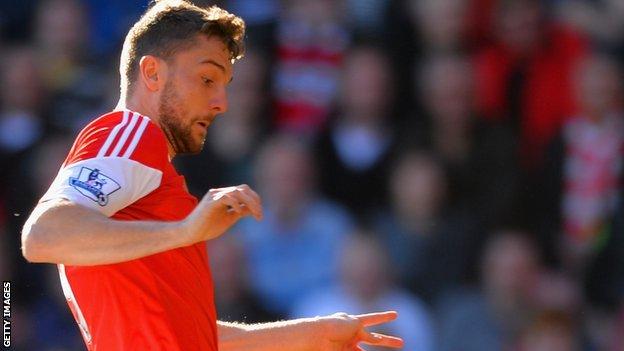 Southampton midfielder Morgan Schneiderlin believes they were only half as good as they could be to beat Norwich and have the quality to win their remaining Premier League games.

"We have eight games left, and why not win the last eight?"

The 24-year-old Frenchman added: "We have a platform and now we want to finish as strong as possible

"Everything is possible and we need to show the same character because some people want to go to the World Cup and others want to get a place in this team for next year, so we have a lot to play for."

Victory moves Saints to within eight points of a European place, with their next match against Tottenham, who currently occupy fifth spot.

Schneiderlin raced on to a Gaston Ramirez through-ball to put the Southampton ahead against Norwich, before Rickie Lambert side-footed a second goal and Jay Rodriguez made it 3-0 as the hosts looked to be easing to victory against the relegation battlers.

However, it took a late Sam Gallagher effort to seal victory after Johan Elmander and Robert Snodgrass pounced on defensive errors to set up a tense finish.

Schneiderlin admits Saint's frailties were exposed by the Canaries in the final stages at St Mary's.

"It was a relief in the end because in the Premier League it shows that you can't just stop playing - it's not possible," he said.

"We need to improve on those things - if we want to be a top-six team then we can't let that happen and that just shows how much work we need to do as a team."