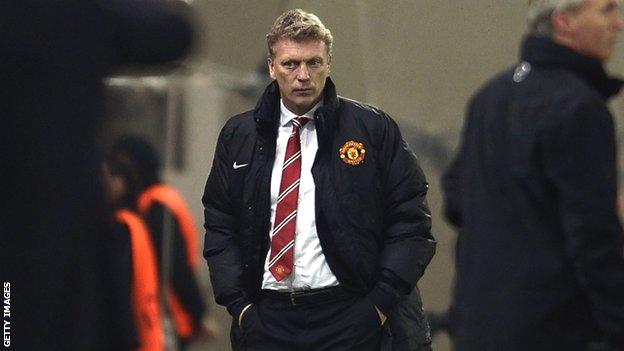 Sheedy, who coaches the Everton under-18 side, worked under former Toffees boss Moyes at Goodison Park.

After United's 3-0 defeat by Liverpool on Sunday, Sheedy tweeted: "All of you out there, Moyes was never interested in our youth team or players."

Moyes was Everton manager for 11 years from 2002 until last summer, when he left to replace Sir Alex Ferguson at Old Trafford.

Under Moyes's replacement Roberto Martinez, Everton are three points ahead of United in sixth place.

Former Republic of Ireland midfielder Sheedy - who made over 300 league appearances for Everton - later deleted the tweets at the request of the club.

United's league form has left them 12 points adrift of fourth place and Moyes's side are looking increasingly unlikely to secure a Champions League qualification spot.

However, they could still qualify as tournament winners and attacking midfielder Juan Mata called on his Old Trafford team-mates to overcome their 2-0 first leg deficit to Olympiakos of Greece at Old Trafford on Wednesday.

The 25-year-old, who is cup-tied for the Champions League last-16 match, said: "We know the history of this club and its achievements, based on a winning spirit.

"That is what we need to beat Olympiakos and get through in the Champions League."

And asked if Moyes would hold on to his job, Harrison told BBC Radio's 5 live: "By the skin of his teeth, I would think. They say the buck stops with the manager, I do feel sorry for him.

"When he does his interviews, I'm not saying he looks ill - but he doesn't look right.

"I hope this [bad run] comes to an end against Olympiakos, because that's our only option."