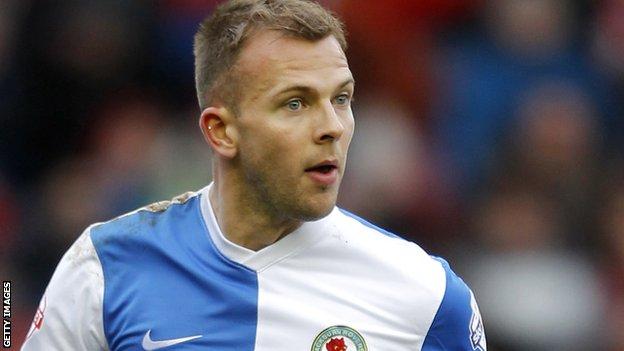 Blackburn striker Jordan Rhodes said he remained calm during his recent goal drought, after scoring a hat-trick against his former club Huddersfield.

The 24-year-old started 2014 without scoring in nine games but now has netted four in his last three matches.

Rhodes moved to Rovers from Huddersfield for £8m last season and scored 28 goals in his first campaign.

Jordan Rhodes' hat-trick took him to 20 goals for Blackburn for the season. He has now scored 20 goals or more every season since 2009/10

"Just because you don't score in a while, things don't change me, I just try and remain positive," said Rhodes.

"I'll go home tonight as if I had not scored in nine.

"It's nice to wear the captaincy coming back to my old club and what better way to make it even more special than score three goals and get the win."

Blackburn's victory at Huddersfield was their first in three games and they are now eight points off the Championship play-off places.

Rovers do have a game in hand on sixth-placed Nottingham Forest, with 11 games of the season remaining.

"We all set ourselves high standards, so to lose three on the spin is never nice," Rhodes told BBC Radio Lancashire.

"We've been well in all three games and got beat, but we showed good character when we went down on level terms to go on and extend our lead."