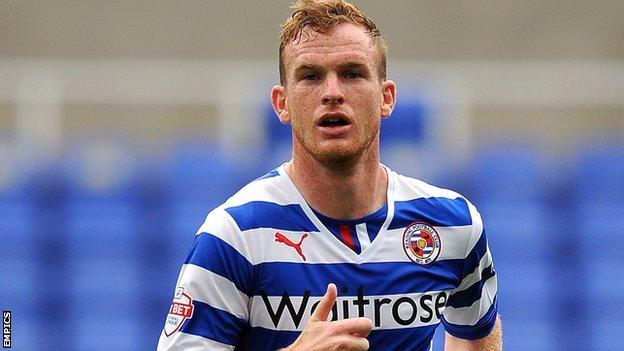 The Royals, held to a 0-0 home draw by Derby on Saturday, have picked up eight of their 15 league wins away from the Madejski Stadium this term.

"We have very good counter-attacking players, and I think when we go away from home we can use them to fuller effect," he told BBC Radio Berkshire.

"At home teams set up not to get broken down, and look to hit us on the break."

Before their last four home matches, in which Reading have scored just one goal and lost two games, the Royals thrashed both Blackpool and Bolton, scoring 12 goals at the Madejski Stadium.

The 25-year-old added: "Away from home, teams come at us and we can utilise the space from that."

Meanwhile, the Royals' last triumph at the Madejski was a 5-1 win against Blackpool on 28 January.

In the four home games since, Nigel Adkins' side have scored just one goal, picked up two points and lost to Sheffield Wednesday and Blackburn.

Reading, who slipped out of the top six following their draw against the Rams, next travel to Birmingham, then return home to host relegation-threatened Barnsley and Huddersfield, before successive away matches at Charlton and Bournemouth.

"We have a few games coming up that are away, and if the past record is anything to go by then it is good news," said Pearce.