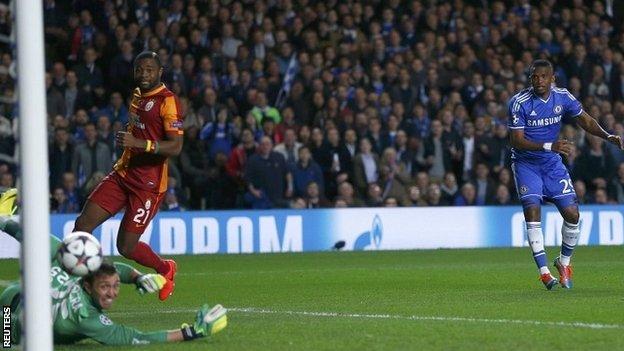 Chelsea became the first English side to reach this season's Champions League last eight by beating a limp Galatasaray.

Former Blues striker Didier Drogba could not inspire the Turkish team, who fell 2-1 down on aggregate when Samuel Eto'o fired home in the fourth minute.

Gary Cahill doubled the lead when scored from close range after John Terry's header was saved.

Galatasaray's night was summed up by Drogba's stoppage-time miss.

After Arsenal and Manchester City were knocked out last week, Chelsea won this game at a canter.

And the result means that Galatasaray boss Roberto Mancini has yet to beat Chelsea boss Jose Mourinho in six European attempts.

Unlike the first leg in Istanbul, when Galatasary recovered from a poor start, they did not look like troubling the Premier League leaders, who responded well to Saturday's surprise defeat by Aston Villa.

Mourinho, who is aiming to win a third Champions League trophy with a different team, said in the build-up to the game that Drogba was still one of the world's best strikers.

But there was no fairytale return to Stamford Bridge for the Ivorian. Instead, Eto'o took centre stage.

The Cameroon forward looked sharp from the start and put Chelsea ahead with his 30th Champions League goal when he latched on to Oscar's diagonal pass to beat goalkeeper Fernando Muslera.

Chelsea, who remain on course to win their third consecutive European trophy, showed far more impetus in the first half with Frank Lampard and Willian wasting good chances after excellent build-up play from Eden Hazard and Oscar.

Felipe Melo's tame shot was Galatasaray's only real effort towards Petr Cech's goal. Drogba's free-kick ended up in the top tier of the Chelsea stand and they did not muster a shot on target all game. 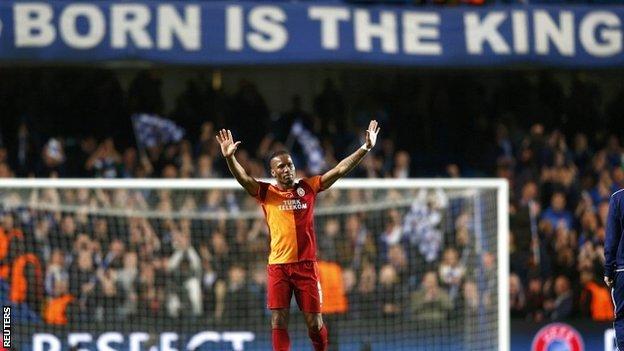 Added to their lifelessness in attack the visitors showed little desire to mark Terry at set-pieces and, after the Chelsea captain volleyed over from a free-kick, he was free to head goalwards from a corner, with Cahill smashing home the rebound.

Prior to this encounter, Galatasaray had failed to beat English opposition in eight attempts and once they had gone two goals behind they rarely looked like changing the game's course.

With Hazard again the creative force, Oscar, Willian and Lampard all had chances to extend Chelsea's lead after the break.

Hazard also drew a late save from Muslera, who is likely to face England in the group stage of the 2014 World Cup with Uruguay.

Despite three second-half substitutions, Galatasaray could not make an impression and Chelsea set themselves up perfectly for Saturday's league game against Arsenal with a comfortable victory.