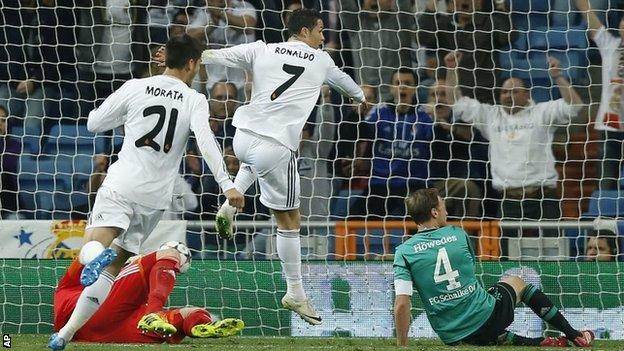 The forward opened the scoring in the 21st minute when he converted Gareth Bale's square ball from close range.

Ronaldo scored his 41st this season with a low shot before Alvaro Morata tapped in the Spanish club's third.

In the build-up to Tuesday's game, Schalke manager Jens Keller admitted the tie was over after his side's 6-1 capitulation at home two weeks ago.

On that day the Bundesliga club's brittle defence was broken many times against a Real side at their most rampant.

Spanish youngsters Morata, Isco and Nacho made the most of their first-team chances, although forward Jese's night ended in the eighth minute when he was carried off on a stretcher after defender Sead Kolasinac had crashed into him. It was later revealed the 21-year-old suffered a cruciate ligament injury and is set to miss the rest of the season.

Jese's replacement, £85m-man Bale, provided the assist for Real's first when his precise low delivery was converted by Ronaldo.

It took Schalke until stoppage time in the first leg to score their solitary goal, on Wednesday it came in the 31st minute.

There was a huge element of luck about it, with full-back Hoogland's low strike from 20 yards spinning off the studs of Sergio Ramos and past Casillas.

That was one of two clear opportunities in the match for the side from Gelsenkirchen - the other was a low strike from Klaas-Jan Huntelaar which drifted inches wide.

Real had chances to improve their advantage in the 10 minutes before and after the interval with Isco and Morata denied by Ralf Fahrmann before the keeper made a good block to keep out Ronaldo's header.

It appeared that Schalke's number one might escape with conceding just one goal at the Bernabeu as Real eased off after the break. However, his hopes were shattered in two explosive minutes.

First, Ronaldo, following more good work from Bale, ran 30 yards before drilling in before Morata swept in Bale's pass, after Ronaldo's shot had rebounded off the bar.

The Portuguese showman later came close to equalling Lionel Messi's Champions League record of 14 goals in one season when his shot hit the post.

But he will get another chance as Real underlined their tag as one of the strong favourites for the title.