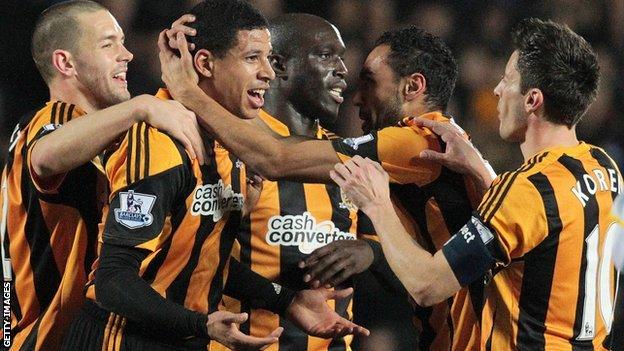 The Football Association has been advised by its membership committee to reject Hull City's plan to change their name to Hull Tigers.

The club formally applied to rebrand themselves from next season, a move that has upset some supporters.

Owner Assem Allam has threatened to sell if he is not allowed to change the 110-year-old name.

An FA source told the BBC he would be "astonished" if the FA council acted against the committee's advice.

An FA statement said: "The FA can confirm its membership committee met on Wednesday [12 March] and has made a unanimous recommendation to the FA council to reject Hull City's request to change their playing name to Hull Tigers from next season.

"The recommendation, which came after consultation with stakeholders within and outside of the game, will be discussed and voted upon at a full FA council meeting on 9 April 2014.

"Hull City are able to make a further submission to the FA council in view of the written reasons, which they have received, before the 9 April meeting."

The Football Supporters' Federation (FSF) has welcomed the recommendation from the membership committee after submitting evidence to the FA opposing the name change.

Kevin Miles, chief executive of the FSF, said: "This is undoubtedly the right decision and credit should go both to the FA and to Hull City fans, who led a tremendous campaign.

"The fans' groups and fanzines who came together under the City Till We Die banner have protected their club's heritage and 110-year-old name with great dignity.

"The FA's decision should also serve as a warning to other owners that such fundamental changes to a club's identity should not be made without the support of the fans."

Egypt-born Allam wants a rebranding in an attempt to appeal to a wider international audience and announced in August that the business which runs the club had already been changed to Hull City Tigers.

The 74-year-old maintained the move would give an "edge" in sponsorship negotiations, because he considers the word City to be "lousy" and "common".

Earlier this month, Allam's son, Ehab, who is the club's vice-chairman, wrote an open letter which also stated that his family had put £74m into the club.

"We have nothing left to give, and this is the reason why the club has to become financially self-sustainable," the letter stated.

"Currently there are six teams in the Premier League with 'City' in their name, and with the exception of Manchester City, all of those clubs are in a similar league position to us, and playing to similar-sized crowds.

Formed in 1904, Hull first wore black and amber shirts for their maiden Football League campaign the following year. The 'Tigers' nickname is thought to have been coined by a Hull Daily Mail reporter in 1905. Hull moved to their KC Stadium home, which they share with Super League side Hull FC, in 2002, after 56 years at Boothferry Park.

"We need something that makes us stand out from the pool of teams we find ourselves in when it comes to attracting potential international sponsors, who are simply hoping to use the Premier League, and its global audience, to advertise."

And speaking to BBC Radio Humberside last week, Ehab Allam admitted the club had been preparing for the FA to reject the application. "My opinion is they want to say 'no'. It's up to us to try to change their minds," he said.

He also revealed the club would ballot supporters for their views on the name change in the coming days, and that the FA had been provided with a figure showing how much the name change would be worth to Hull financially should the application be successful.

Hull's owner was criticised by the "City Till We Die" group after claiming in a newspaper interview that his opponents could "die as soon as they want", but manager Steve Bruce later claimed the owner had been misinterpreted.

Allam took charge of the club in December 2010 and rescued it from administration, last season overseeing promotion to the top flight for only the second time in the club's history.

Hull are 13th in the Premier League and play West Bromwich Albion at the KC Stadium on Saturday.