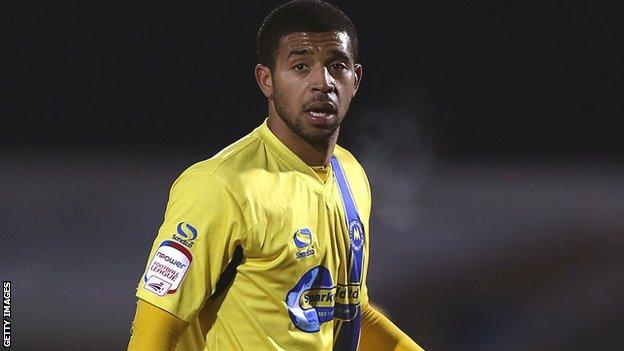 The Gulls have confirmed they have lodged an appeal with the Football Association, but have not divulged the principal grounds for the decision.

The incident occurred in the club's 3-1 loss to Chesterfield but Labadie, who denied the charge, was not punished during the game.

Torquay, who are bottom of League Two and eight points adrift of safety, have 10 games of their season left.

The appeal means that Labadie will be available to appear against Bury on Tuesday.

Labadie received the lengthy ban and a £2,000 fine on Wednesday after he was found guilty of violent conduct by an independent regulatory commission.

Torquay received the written reasons for the panel's decision on Friday and had until Monday to decide whether to appeal against it.

Labadie appeared in Torquay's 1-0 defeat by Cheltenham on Saturday, starting the game in the centre of midfield before being replaced by Lee Mansell on 82 minutes.

Chesterfield declined to make an official complaint at the time but Spireites player Ollie Banks made allegations on Twitter that he had been bitten during the game.

Following the judgement, Chesterfield - who are one point clear at the top of League Two - stressed they are keen to move on from the incident and that they had no direct involvement in the bringing of the charge.

Gulls boss Chris Hargreaves has declined to discuss the issue in his news conferences since the charge, but previously denied any wrongdoing on behalf of Labadie and the club.

The 23-year-old's suspension was the same as that given to Liverpool striker Luis Suarez for biting Chelsea's Branislav Ivanovic last April.

The Uruguayan had previously been banned for seven games in 2010 after biting PSV Eindhoven midfielder Otman Bakkal's shoulder while playing for Ajax.

Labadie has made 10 appearances for the club since joining from Notts County in January, scoring one goal.