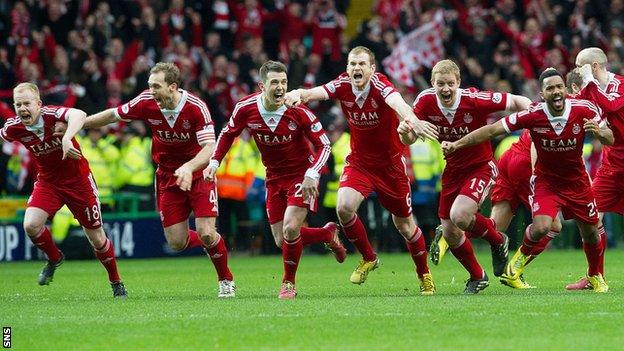 Motherwell manager Stuart McCall admits he could not bring himself to watch Aberdeen's League Cup celebrations.

The Fir Park men have found it difficult to replicate their consistent league form in the domestic cups.

McCall had a tinge of jealousy as Aberdeen lifted the trophy with a penalty shoot-out win over Inverness.

He said: "As soon as the final penalty went in, I switched the telly over to the Arsenal-Tottenham match because I didn't want to watch the celebrations."

Inverness will be ready come Wednesday, there's no doubt about that. They have got too many good professionals in their ranks

McCall led the Steelmen to the 2011 Scottish Cup final, but his side were defeated 3-0 by Celtic at Hampden.

Since then, the Lanarkshire club have experienced early exits in the cup competitions, not least to 10-man Aberdeen in this season's League Cup.

"It still hurts that we lost that quarter-final to Aberdeen," said McCall. "It's not sour grapes. I felt we had a good goal disallowed and they defended ever so well with 10 men.

"There was a little tad of jealously there. I thought I'd done well watching the game.

"We want to get to finals, that's what we want to do, but we've just got to focus on finishing as high up the league as we can."

Motherwell host Inverness on Wednesday just three days after the shoot-out agony at Celtic Park and McCall hopes the extra-time and penalties have taken their toll on the Highlanders for the Premiership encounter.

"Caley had the game last week against Hibs and then they have had to go through the heartbreak of extra-time and penalty kicks - if I'm being honest, that's what I wanted to happen," said the Well boss.

"We are trying to gain every little bit of advantage.

"They will be ready come Wednesday, there's no doubt about that. They have got too many good professionals in their ranks.

"They have 11 games left and will be doing everything they can to finish in a European slot.

"It's something they have not done before, but I don't think there will be a reaction given the fact they have got a group of experienced professionals who have done terrifically well for the club."

Inverness had struggled for form recently, losing two consecutive games 5-0 to Celtic and Dundee United, but McCall had noticed an improvement in their backline in their last two games against Hibs and Aberdeen.

"They've played two games and extra-time and not conceded," he said. "They have played a different shape.

"On the back of conceding five twice, they've tightened it up a little bit.

"We've just got to focus on ourselves and the amount of goals we've been scoring at home has been encouraging of late.

"We've got five games before the split, the next three are at home, we've got to try and take advantage of that.

"It's actually about seven months since we last played them, but Inverness gave us a bit of a going over up there.

"If Inverness can get their full 11 out on the park, they're a match for anyone in this league and I think they proved it."