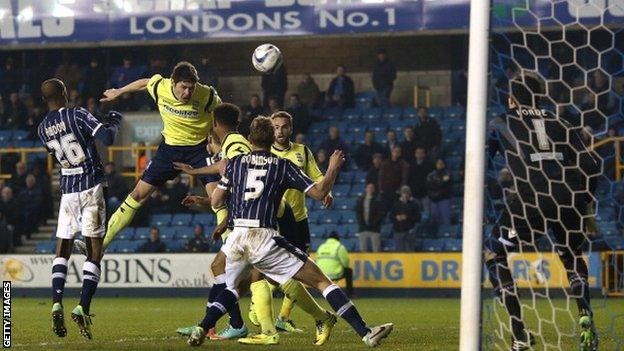 Millwall's relegation concerns increased with a third defeat in four games as Birmingham City won away from home for the eighth time this season.

On-loan Jordon Ibe put Blues ahead from 20 yards, before Steve Morison equalised with a deflected shot.

But the visitors regained the lead, Andrew Shinnie heading home before Nikola Zigic made it 3-1 with a header from Chris Burke's chipped cross.

Ian Holloway's side have failed to win their last six home games in the Championship.

Simeon Jackson's penalty proved nothing more than a consolation.

Ian Holloway's side are bottom of the Championship, level on points with Yeovil and Barnsley but below them on goal difference.

With 21st-placed Charlton's vastly superior goal difference - minus-18 compared to minus-32 - Millwall are effectively four points from safety with eight games remaining.

In contrast, Birmingham, without a win in their previous five games, are in 19th, with an eight-point safety cushion.

Millwall were back on level terms when Morison's shot - which appeared to be missing the target - hit defender Paul Robinson before going in.

It was 3-1 seven minutes after the break when Zigic met Burke's cross at the far post.

Jackson reduced the deficit with two minutes to go with a cool penalty after he was fouled in the box by Aaron Martin.

"We've got eight games left and we've probably got to win five of them, then we might stay up.

"You probably think I'm crazy, but I don't. I think we can do it with the chances we are creating.

"I'm devastated, I have to say that. It was a must-not-lose game and we've lost it. We've got to keep fighting."

"Everyone put in a tremendous performance and I'm delighted for the players. They knew how big this was.

"But we're not safe yet. Until it's mathematically impossible for us to get dragged into it we have to keep going.

"I see the results the teams in and around us have got and it just tells me it's never over until it's over."