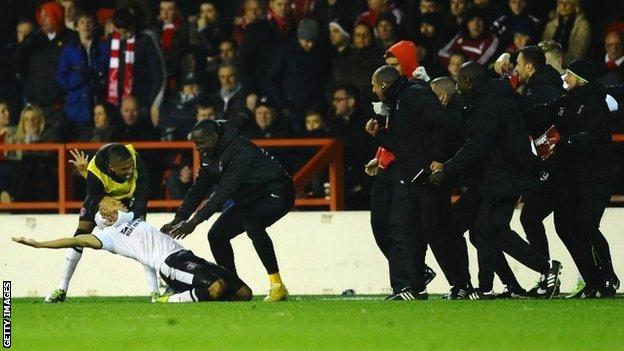 Forest, who sacked manager Billy Davies on Monday, were jeered off and are now without a win in nine games.

Marvin Sordell hit the post for the visitors after 20 minutes and Forest only began to apply pressure late on.

Cousins earned the Addicks a deserved win, slotting in after Jonathan Obika's shot hit the post in the 80th minute.

The victory opens up a gap of three points between the Londoners and Yeovil in the final relegation position directly below them.

Academy manager Gary Brazil took charge of Forest after Neil Warnock passed up the chance to succeed Davies on Monday.

His side initially started well with Jamie Mackie heading narrowly wide after inventive work from Danny Fox, but the hosts were easily contained from then on.

Forest roused themselves after falling behind, but left themselves too little time to mount a comeback.

Jamie Paterson sent a free-kick over the top before Danny Collins's header went the same way as their side remained two points off the play-off places.

"I don't think that's a thought in any shape or form.

"It's an awkward situation, but we have got to batten down the hatches and work hard.

"It's no good feeling sorry for ourselves, that will get us nowhere. We have got to dig in and crack on."

"Organisation was key and we had that and some quality.

"In our situation we have to take our chances when we get them and at last we scored. We are all in this together and this was one good step in the right direction."