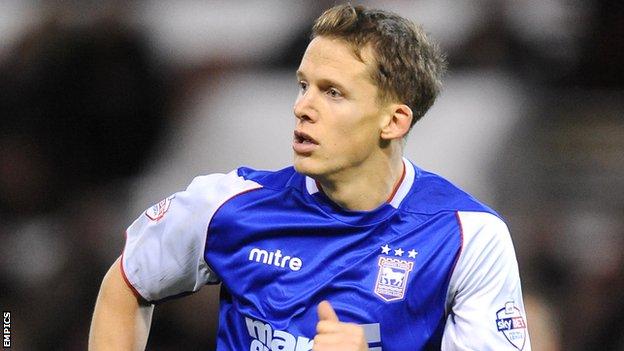 Derby got off to the perfect start when Patrick Bamford turned in Craig Forsyth's low cross after 34 seconds.

It took some time for Ipswich to get into their stride but loan signing Jonny Williams's 30-yard strike brought them level 20 minutes from time.

That set the scene for Berra's late header, the defender rising to meet Aaron Cresswell's cross.

Derby are fourth and manager Steve McClaren might wonder how his team managed to lose given they started so well.

Fresh from slamming five past Nottingham Forest at the weekend, Bamford converted from Forsyth's delivery and was a real threat throughout the opening period.

He should have had a second just after the re-start but he failed in his attempt to chip Dean Gerken after being sent clean through.

The introduction of Sylvan Ebanks-Blake and Frank Nouble changed the contest as not long afterwards, Cresswell played a short free-kick to Williams, who found the corner from 30 yards.

Ebanks-Blake then headed against a post but there was still enough time for Berra to settle the contest.

"We will just keep ticking away and trying to pick up points. I'm very pleased with the result and the response after conceding a goal after less than a minute.

"It was more like us after the break, as I don't think we laid a finger on them in the first half. But I thought we deserved the win in the second half."

"We have Charlton on Saturday and we have to take our disappointment and anger and make sure we don't let another one slip.

"I thought we controlled the game, created chances but there was not enough care in the final third.

"Our keeper has not had a shot to save apart from picking the ball out of the net from two set-pieces. We caused our own problems in the end."