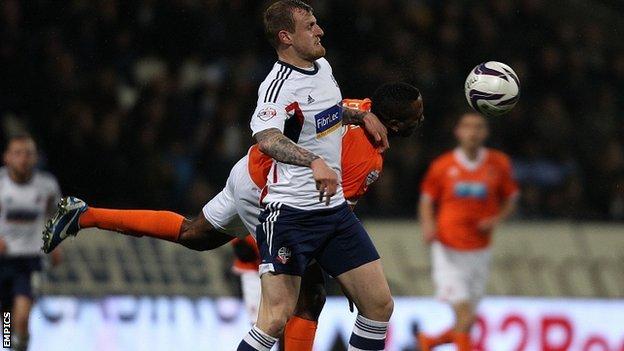 Bolton kept up their good run of form with victory over Blackpool thanks to David Wheater's first-half header.

Wheater headed home Jay Spearing's corner after 15 minutes, and it was enough to make it one defeat in eight matches for Dougie Freedman's side.

Bolton survived when Zat Knight headed against his own post, and Blackpool loan signing Robert Earnshaw could not rescue the visitors on his debut.

The Tangerines have now lost 11 of their last 12 matches away from home.

Andy Halliday, Elliot Grandin and Gary Mackenzie all had chances to level for Blackpool, before Bolton substitute Jermaine Beckford went close and the momentum shifted back to the home side.

"I never felt we were in any relegation trouble and I also felt that we had enough to win games of football.

"I've said to the lads that they've got to keep on playing. There's a lot to play for within the club."

"Do I feel safe with us being nine points above the drop zone? No I do not feel that we are comfortable at all.

"It should have been 12 points above the drop zone because I thought we were the better team, but it's not.

"We'll just move on to Saturday and we'll be ready for QPR. But I still feel we are no way near safety yet."