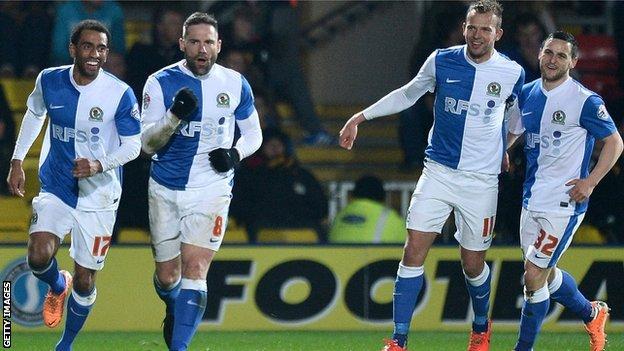 Watford were level when Troy Deeney scored a penalty and took the lead through substitute Cristian Battocchio.

But there was late drama as Tommy Spurr's cross was met by Gestede.

Both sides look set for another season in the Championship, locked in mid-table with nine fixtures remaining, but the Hornets' fine home form had given their fans some hope of a repeat of last year's run to the play-off final.

They led when Cassetti buried his first goal for the club from Deeney's cross, but Dunn lashed in from the edge of the box after Manuel Almunia had punched out a corner.

Veteran Dunn then slid in Conway for Rovers' second, only for referee Darren Sheldrake to penalise Todd Kane for handball, with Deeney scoring the penalty.

Battocchio ran clear to score with two minutes left but there was still time for Gestede to head in a last-gasp leveller.

"We were comfortable at 2-1 and the penalty changes the course of the game.

"Our lad is stood two yards from (Ikechi) Anya when he crosses it and the ball hits the hand.

"We need some clarification because it changed the course of the game."

"We nearly won this game but it was not only this game. Since I joined the club there were many games we have dropped points in the last five minutes of games.