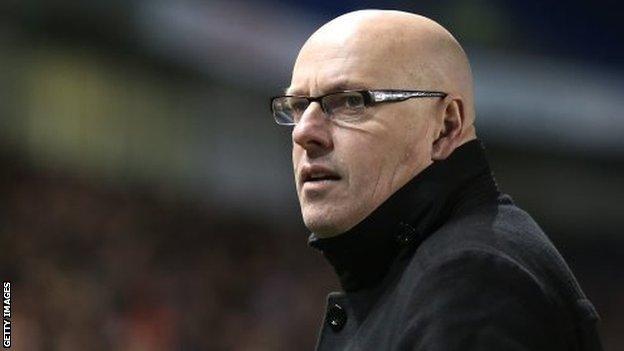 Bournemouth ensured that a bad week for Leeds continued with a heavy defeat thanks to a brace apiece from Yann Kermorgant and Lewis Grabban.

The Cherries had never beaten Leeds but were cruising at half-time. Kermorgant flicked in a shot from Simon Francis and Grabban then slid home.

Grabban then hammered in a third and Kermorgant headed in Matt Ritchie's cross after the break.

Leeds did register when Ross McCormack scored his 26th goal of the season.

A traumatic season off the pitch for Leeds reached a new low on Monday when owner Massimo Cellino was disqualified from buying the club by the Football League.

Cellino told BBC Sport that the club need "help, blood and money" in "hours, not days" and this chastening defeat - which leaves Brian McDermott's men in 14th place, five points behind Bournemouth and 12 points adrift of the play-off places, will only add to his pain.

The game was over inside half an hour. Leeds were unable to cope with Bournemouth's set-pieces and the home team were ahead inside two minutes through Kermorgant.

Grabban quickly added two more, his second a powerful shot past Jack Butland after more good work from Francis, and Kermorgant was left completely unmarked to head a fourth.

Leeds - who host Doncaster at the weekend - have now won two of the last nine games.

"If we can keep working as hard as we are and performing how we are then hopefully we can close that gap to the play-offs and come the end of the season who knows what can happen.

"Earlier in the season we didn't get what we deserved in a number of games but in the last 10 games or so our performances have been terrific."

"We need the ownership of this club to be sorted in the right and proper way.

"It does affect what is going on, on the pitch - there is no doubt about that.

"I have not had this before, a team that concedes four or five goals and we need to sort it out very, very quickly."