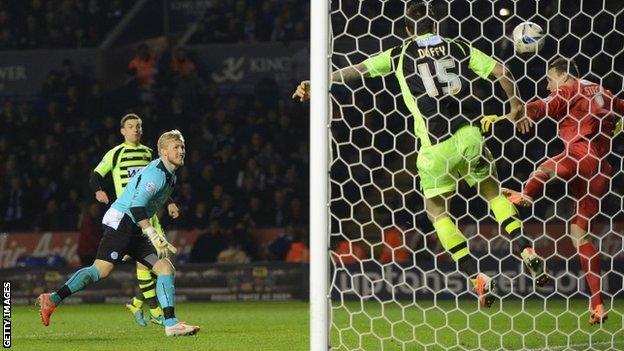 The Foxes piled on the pressure after the break - having 27 efforts - but were frustrated until stoppage-time.

Goalkeeper Kasper Schmeichel came up for a corner and headed against the crossbar, before Chris Wood headed in the rebound.

The late goal stretched City's unbeaten league run to 18 games and the Foxes are now three points clear of second-placed Burnley ahead of Saturday's trip to Turf Moor.

Foxes manager Nigel Pearson took his usual place in the stands after spending two nights in hospital following an illness scare on Saturday.

Jamie Vardy missed an early chance for the hosts and strike partner David Nugent saw his close-range shot saved by Marek Stech before Ralls curled past Schmeichel to give the Glovers an unlikely lead.

But Schmeichel eventually made the difference, thumping a header against the crossbar which bounced down on to the line before Wood bundled the loose ball home.

Leicester assistant manager Craig Shakespeare: "I don't really care who scored. They are both claiming it.

"Kasper has been looking at the video evidence. When his header came down off the bar I didn't see the linesman signal the goal so I am pleased that Chris made sure.

"They can fight over it in the dressing room."

"It was a frustrating game for us but I suppose, on reflection, you have to be delighted to get a late goal in the manner that we did."

Yeovil manager Gary Johnson: "I'm proud of the boys. They can't do any more than they have done tonight.

"We didn't come here and park the bus as some teams may have done. We created opportunities for ourselves and caused them problems.

"We could have gone 2-0 up against a side going into the Premier League, which is what they are going to do."