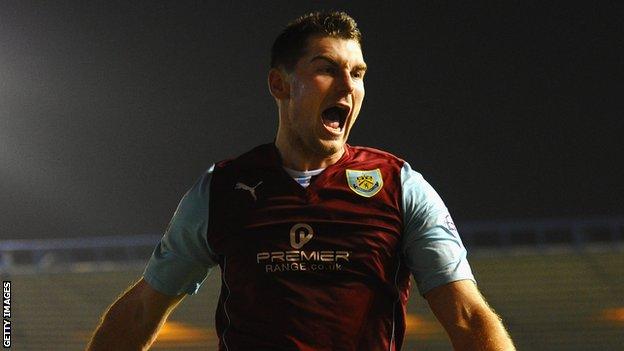 Burnley kept their automatic promotion push on track with a win over Doncaster to move three points behind Championship leaders Leicester.

Sam Vokes set the Clarets on their way from the penalty spot after Ashley Barnes was fouled by James Coppinger.

Junior Stanislas's second league goal of the season doubled the score after a swift counter attack.

Doncaster's David Cotterill hit the bar in the closing stages as his team lost for the first time since 1 March.

Burnley already have three more points than in 2008-09 when they won promotion to the Premier League after beating Sheffield United in the play-off final.

The Clarets are 10 points ahead of third-placed Queens Park Rangers, and could go top of the Championship with just seven games remaining, if they defeat Leicester on Saturday at Turf Moor.

Sean Dyche's team are in fine run of form, winning eight of the last 10 league matches, and have now won the last five at home.

Burnley, the most threatening side in a goalless first-half, took the lead through Vokes' 20th league goal of the season.

It came after Barnes had been pushed by Coppinger in the 47th minute, with Vokes making no mistake from the penalty spot.

Billy Sharp then had a rare opportunity to bring Doncaster level, but the on-loan Southampton striker volleyed over the bar.

Burnley put the game out of Doncaster's reach when Stanislas kept his composure to score after David Jones had played the winger through on goal.

Doncaster, who are eight points above the relegation zone, threatened when Cotterill's free-kick hit the bar and Abdoulaye Meite fired over.

"I thought they gave us a very hard game and I thought we had to be resilient in the first half.

"In the first half we have had an absolute stonewaller of a penalty on Ashley Barnes so, if you are going to look on the balance of play, we haven't got one but we've got the other.

"We've had our own share of things not given for us so I understand Paul Dickov's frustration, I've been him on a number of occasions."

"I did not think it was a penalty at the time and we just watched it numerous times and we still do not why it has been given.

"I know Burnley felt they should have had a penalty in the first half and a few of their players and staff were at the referee in the tunnel so it's whether that has got to him or not.

"For that to happen 20 seconds into the second half it is a massive, massive moment in the game."