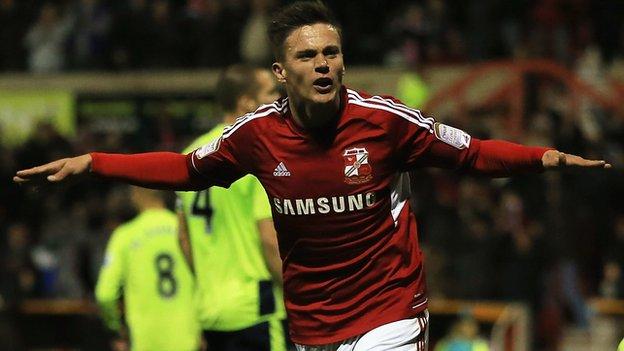 Alex Smith netted the opener, his first goal for Swindon, when he lashed the ball home from the edge of the box.

But Town's lead lasted only three minutes, as Ryan Lowe's cross found Max Power, who slotted in with ease to bring the hosts level.

Both Lowe and Power hit the woodwork early in the second half before forward Storey found the net with a cross-shot from a tight angle.

It was a fifth career goal for the 20-year-old, who returned from a loan spell at Shrewsbury Town earlier this month.

The result means Tranmere remain 20th in the table - level on points and goal difference with Carlisle but only above them on goals scored.

Swindon stay eighth in the standings, but are now just four points from the play-offs.

"It's really frustrating. You have large parts of the game and end up coming away with no points. It's frustrating and disappointing.

"We wanted to be positive and stop them playing, because they are a good footballing side.

"We looked like a team at the right end and not the wrong end of the table. When things are against you, they're against you."

"We didn't play particularly great in the first half and we had a few choice words at half-time.

"I've said all along, when people mooted the play-offs had gone, I just wanted to finish the season strongly.

"We've played the last three games and got seven points, so we just want to end the season as strong as we can."