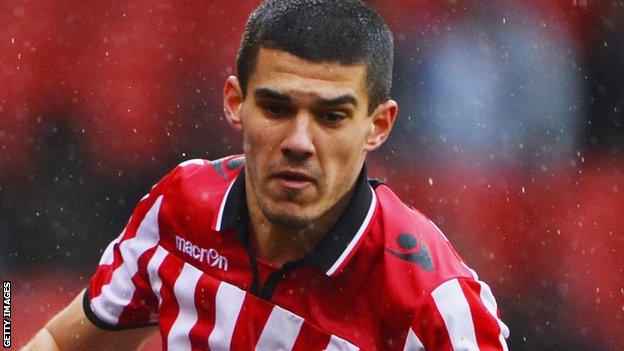 Sheffield United edged closer to the play-offs after a Conor Coady double gave them a comfortable win at Crawley.

Coady opened his account in the first half when Jamie Murphy's cross reached him and he fired home.

The hosts had their chances but both Mark Connolly and Andy Drury failed to find the back of the net.

The Blades made sure of the win when Murphy again found Coady from his delivery and the on-loan Liverpool midfielder slotted in at the back post.

Nigel Clough's side are seven points off sixth-placed Peterborough with games in hand on the teams around them.

"There were a lot of positives from the game, which I will keep, in terms of we kept the ball. I was disappointed in the final third of the pitch, everything before that was excellent and I can't fault anyone or there effort, we just lacked that spark.

"Their goalkeeper has made some brilliant saves so we kept him busy but we should've have been more clinical.

"There is not too much for me to complain about because there was an incredible effort and the result flattered Sheffield.

"We have an incredible next five matches, with four of them away from home and I suppose we are suffering from the bad weather we had in January and we seem to do things the hard way."