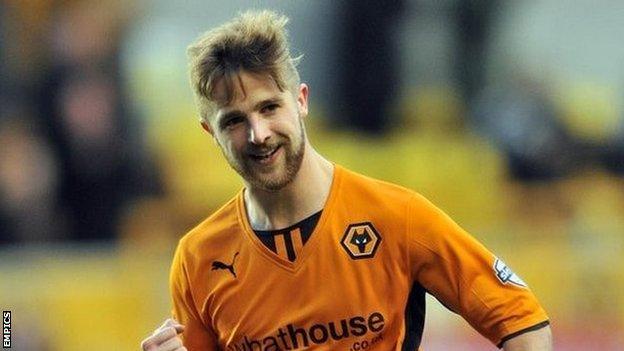 Leaders Wolves survived a scare against Colchester to go four points clear at the top of League One.

The hosts led inside two minutes when Michael Jacobs' cross found the net, before David Edwards seized on a loose backpass and James Henry tapped in.

But Colchester fought back, with Alex Gilbey's header and David Wright's volley setting up a tense finish.

Wolves back on course?

Wolves dominated possession from the start of a one-sided first half, leading 3-0 at the break.

Leon Clarke three times went close to his first goal at Molineux since returning to the club from Coventry.

Clarke had a header saved by Walker and another fly narrowly wide. And, when Walker turned his effort into Henry's path just before the break, the winger netted the rebound.

Jacobs and Edwards both missed excellent chances at the start of the second half before Colchester's stirring fightback.

Kenny Jackett's side had to endure a nervous finale until Dicko sealed a 14th home league win of the season with virtually the last kick.

"You see a lot of comebacks in football and Colchester have a lot of spirit.

"They changed their system, went went to a diamond and caused us problems.

"Things weren't perfect. You can't just expect it happen. But four goals at home is a big positive and overall I felt we deserved to win.

"With us winning and Brentford losing, it's been a good night for us."

"I thought the second half we were excellent. We made some substitutions, tactically changed the shape, and had a great response.

"Freddie Sears hits the post, could make it 3-3. We were going for it at the end and left ourselves open a bit at the back.

"In the end 4-2 looks harsh. I know they had a lot of chances, but that's not my fault they missed them.

"I have to pay great credit to the players, in the second half they really dug in deep and showed great character again."