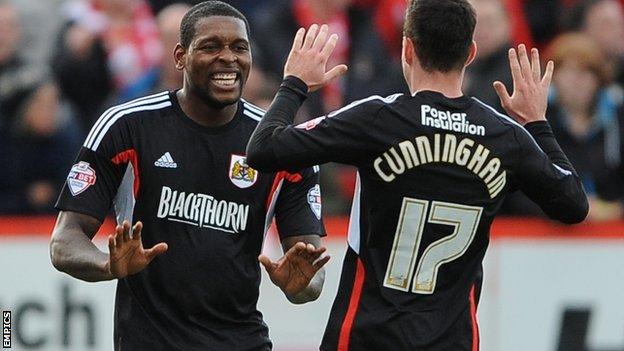 Steve Cotterill's men found themselves 4-0 up at half-time, Jay Emmanuel-Thomas scoring either side of goals from Sam Baldock and Nyron Nosworthy.

And Baldock completed the emphatic win by latching on to Wade Elliott's pass to fire in his 22nd goal of the season.

The victory moved City up to 13th in the table - their highest position since August - and they are now unbeaten in six games.

Emmanuel-Thomas opened the goal rush with a low drive in the 16th minute, before curling a glorious shot past keeper Sam Johnson on the stroke of half-time.

After his first goal, the former Arsenal forward provided the long throw that led to loanee Nosworthy heading home.

Baldock fired in the third after poor Vale defending and coolly slotted past Johnson in the second half to complete the rout.

"We know we are always going to score goals but a clean sheet is pleasing for the back three and Frank Fielding.

"I'm really pleased for the boys because this has been coming for a while.

"They're a good bunch of players with a good spirit amongst them.

"There's two spirals in football: one up and one down, there's nothing in between. Hopefully we're on the up."