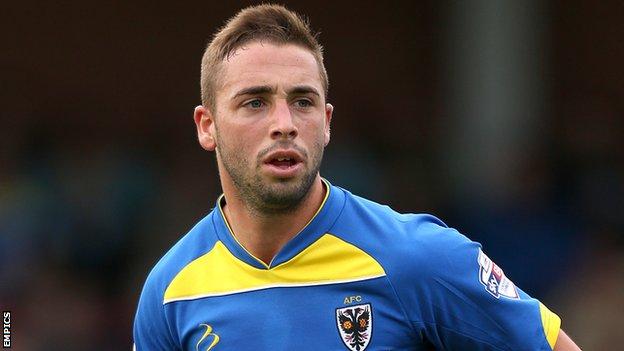 The away side took a first-half lead when Tom Richards crossed for George Francomb to finish well.

After Jack Midson handled inside the box and was sent off, the Cobblers equalised through a Darren Carter penalty and the midfielder then curled a shot into the bottom corner.

But deep in injury-time, Moore got on to Alan Bennett's cross to earn a draw.

The result means Northampton are two points from safety in League Two, with both Portsmouth and Wycombe on 42 points.

"When people score that late against you, it feels like a defeat.

"We should've been a lot better in possession, but we've had chances to score and we haven't taken them.

"If you can't put teams to bed then you run the risk of this type of thing happening.

"We're working extremely hard to bring in another forward before Thursday's loan deadline, because we need to give Emile Sinclair and Alan Connell a bit more support."