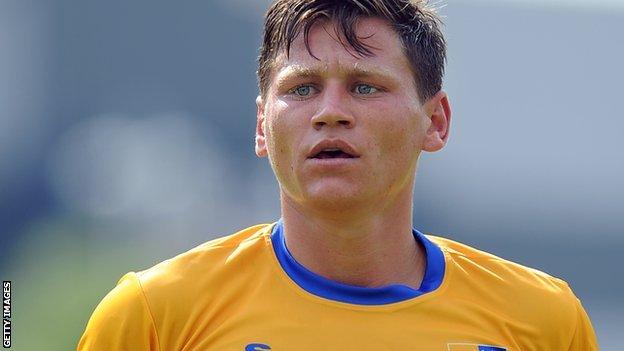 James Jennings struck a rare double to inspire Mansfield to a vital comeback win at Hartlepool and boost their bid to beat the drop from League Two.

The defender put the Stags in front from close in, only for Marlon Harewood to convert a Jack Barmby pass to level.

After Harewood had a penalty saved before the break, Luke James netted from 18 yards to put Pools in front.

Jennings' free-kick made it 2-2 before a Matt Rhead header and Jamie McGuire's strike won it for Mansfield late on.

It was the first time the Stags have scored four times and won in League Two this season and leaves them seven points clear of danger.

The result deals a significant blow to Hartlepool's outside hopes of a play-off spot, with a nine-point gap to seventh-placed York.

"We shouldn't be shocked by the manner of the goals and what Mansfield Town do, we knew what to expect. Having watched the goals back, it's not a pretty watch.

"We'll analyse the goals and hopefully there'll be no repeat against Cheltenham on Saturday. I'm not knocking the way Mansfield play, they have a way to play, and when we went down there we dealt with their physicality.

"I'm disappointed and frustrated and the lads are shell-shocked.

"In terms of numbers we're fairly thin on the ground now, and I'll be looking to do something about that on Wednesday and Thursday."

"The boys have put in a great shift. That second-half performance warranted the win.

"We were a bit annoyed with the second goal that went in, I thought it was sloppy defending.

"We want to enjoy the win but it's feet firmly back on the ground.

"They're a tremendous group, they keep ramming everything back down my throat and that's what I want."