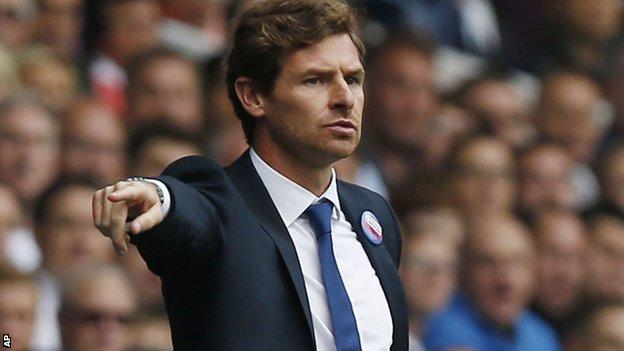 Former Tottenham and Chelsea boss Andre Villas-Boas has agreed a two-year deal to manage Zenit St Petersburg, according to the Russian club.

The 36-year-old, who was sacked as Spurs manager in December, will replace Luciano Spalletti.

"Zenit has agreed terms on a contract with new head coach Andre Villas-Boas," said a statement on the club's website.

Coming out of Mourinho's shadow

"Mr Villas-Boas will be presented in St Petersburg as Zenit's new head coach on 20 March."

Spalletti was sacked after the club lost their Champions League last-16 first leg tie 4-2 at home to Borussia Dortmund and dropped to second in their domestic league.

Sergey Semak was appointed as acting head coach but now Villas-Boas will assume the managerial reins a day after Wednesday's second leg against Dortmund.

Villas-Boas was part of Chelsea manager Jose Mourinho's backroom staff before moving into management with Academica and Porto in his home country of Portugal.

He won the league, cup and Europa League in his first season at Porto before taking over as Chelsea boss in June 2011, but was dismissed in March 2012 as his side struggled for form.

Tottenham appointed him in July 2012 and he led them to fifth in the Premier League in his first season in charge as the club narrowly missed out on earning a Champions League qualification place.

Spurs were seventh in the Premier League following a 5-0 defeat by Liverpool in December when they decided to part company with Villas-Boas.

He now takes over at Zenit, who are owned by state-controlled gas company Gazprom and are one of European football's biggest spenders.

They signed Brazilian striker Hulk from Porto and Belgium midfielder Axel Witsel from Benfica for a combined total of £64m in September 2012.

Villas-Boas worked with Hulk during his time at Porto, while Portuguese duo Luis Neto and Danny are also part of Zenit's squad.

In December 2012, the club's largest fans' group, Landscrona, called for gay and non-white players to be excluded from the team.

However, Venezuela striker Jose Salomon Rondon was signed in January 2014 as he became the first black player to join the club following those comments.