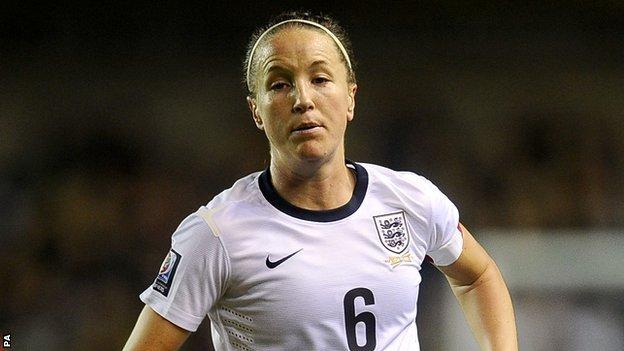 Casey Stoney is back in the England squad for the 2015 World Cup qualifier against Montenegro on 5 April.

The captain has recovered from a foot operation and is one of two changes from the squad which finished runners-up at the recent Cyprus Cup.

"It's great for us to get back together so soon after our time in Cyprus, which was a camp we took many positives from," said England coach Mark Sampson.

England are currently top of Group 6 having won each of their four games under Brent Hills when he was interim head coach. The World Cup will be held in Canada in 2015.

The match against Montenegro, which will be live on BBC Two, will be Sampson's first qualifier in charge of the side.

"There is a real sense of optimism within the group about the journey we have set out on - we have made a positive start which we are keen to build on," he said.

Arsenal defender Stoney, 31, has made 116 appearances for the national team, scoring five goals.