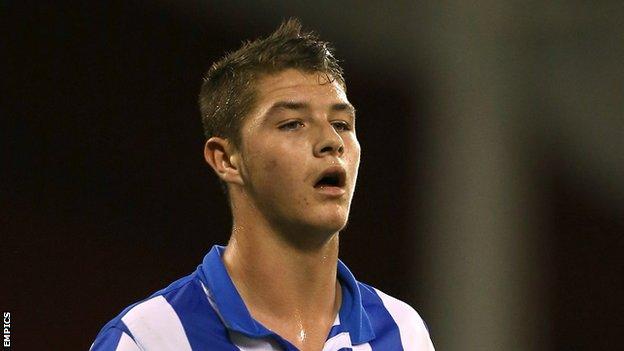 Hartlepool midfielder Brad Walker has paid tribute to manager Colin Cooper after he was named League Two apprentice of the year.

Walker, 17, only made his Pools first-team debut in August, and in total has made 33 appearances this season.

The Billingham-born teenager has also won England Under-18 recognition, as well as scoring three goals.

He told BBC Tees: "The freedom the manager gives us is key, we play with no pressure."

Winning England recognition does give me a lot of confidence. Being alongside lads from Premier League and Championship clubs, matching their tempo, is brilliant for me

Walker admitted he did not foresee the success he has enjoyed after starting pre-season in the youth team.

"I'd have laughed if anyone had said I'd play more than 30 games for the first team, but I got my chance and kicked on.

"I have to thank the manager for giving me that chance, but also the way he encourages myself and the other young players in the team to play. We play with no pressure, but we do have experienced players helping us out."

Youth has been a feature of Cooper's team this season, with Walker, 19-year-old forward Luke James and 20-year-olds Darren Holden, Jordan Richards and, before his sale to Peterborough United for £500,000 in January, Jack Baldwin, all regular starters.

Walker has been at the club since he was 13, when he sometimes cycled to training from his home - a round trip of around 12 miles.

Saturday's emphatic 4-0 win over Bristol Rovers saw Hartlepool move to within three points of a play-off place, and Walker - who curled in a shot from 25 yards during the game - believes promotion is very much on the cards.

"Anything is possible in this league, if we kick on like I know we can we can definitely get into the play-offs.

"For myself, winning England recognition does give me a lot of confidence. Being alongside lads from Premier League and Championship clubs, matching their tempo, is brilliant for me."