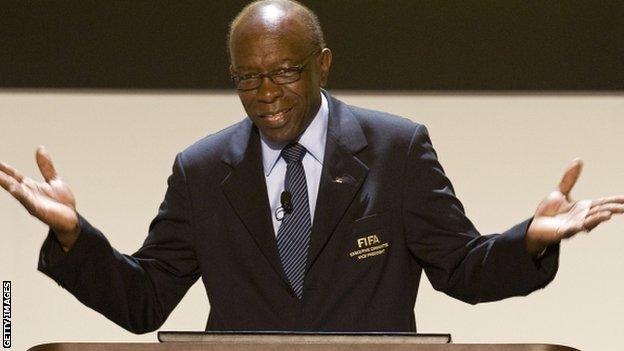 Former Fifa vice-president Jack Warner and his family were paid more than £1m by a company owned by an ex-football official from Qatar, a Daily Telegraph report claims.

But Qatar's World Cup organising committee said its bid adhered to Fifa rules and it was "unaware of any allegations surrounding business dealings between private individuals".

The newspaper claims Warner and his sons appear to have been paid £1.2m by a company owned by Mohamed Bin Hammam.

Some of the payments were allegedly made shortly after Qatar won the right to host the 2022 World Cup.

Bin Hammam was a powerful figure within Fifa for many years but was given a life ban in 2012 by the governing body following allegations of "conflicts of interest" during his time as the head of Asian football.

Warner said: "I have no interest in joining in the foolishness that is now passing as news on Qatar and Jack Warner.

"Nor do I intend to join those who are on a witch hunt against the World Cup 2022 venue. And do consider this as my final comment on this matter."

The new documents, which the Telegraph claims to have seen, may now attract the attention of Fifa's chief ethics investigator, Michael Garcia, who is looking into how both the 2018 and 2022 tournaments were awarded.

In a statement, Qatar's World Cup organisers said: "The 2022 bid committee strictly adhered to Fifa's bidding regulations in compliance with their code of ethics.

"The supreme committee for delivery and legacy and the individuals involved in the 2022 bid committee are unaware of any allegations surrounding business dealings between private individuals."

Bin Hammam declined to comment when contacted by the BBC over the allegations in the Daily Telegraph.