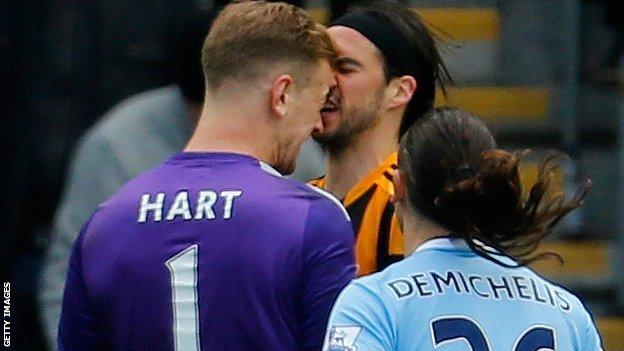 Hull City's George Boyd has been charged with misconduct by the Football Association after allegedly spitting at Manchester City's Joe Hart.

The incident took place during Hull's 2-0 Premier League defeat at the KC Stadium on Saturday.

It was missed by referee Lee Mason, but Boyd was charged after a three-man panel reviewed video evidence.

The former Stevenage and Peterborough winger has until 18:00 GMT on Wednesday to respond.

Hull manager Steve Bruce insisted Boyd had not spat at Hart after the two clashed in the penalty area.

"George Boyd wouldn't do that, no chance," said Bruce. "Not deliberately, anyway. He is as honest as they come."

Hart, angry that Boyd had gone to ground following a challenge by the goalkeeper, will face no further action for his part in the incident.

The England international, 26, touched foreheads with Boyd but was booked by Mason.

As a result, the FA considers the matter dealt with.

Boyd, for his part, felt Hart should have been shown a red card.

"He didn't nut me, but he's put his head in, so he should have got sent off really," said Boyd.

"He said afterwards that he didn't touch me, but I thought he touched me a little bit. He apologised for the reaction and that's it."

Manchester City captain Vincent Kompany has also avoided any further punishment for his reaction to being sent off in the same game.

Kompany, 27, was dismissed for a professional foul on Nikica Jelavic in the 10th minute and reacted angrily to the decision, kicking a wall as he made his way down the tunnel.

The Belgium international also appeared to make a gesture towards fourth official Anthony Taylor but, having explained his actions to the FA, will face no further censure.

As a result, the defender will now serve his mandatory one-match suspension in this weekend's home clash against Fulham and will then be eligible for the derby against Manchester United on 25 March.