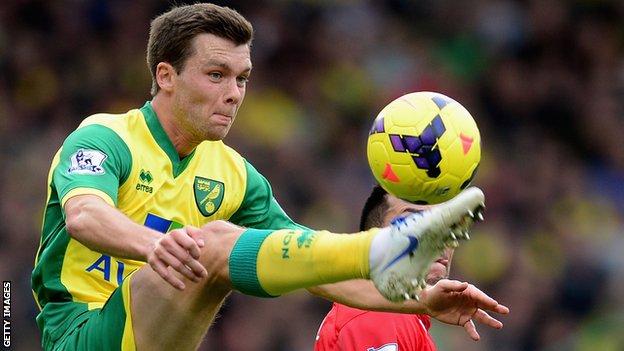 Norwich midfielder Jonny Howson believes two quick wins can lift the pressure on the players over their standing in the Premier League.

The Canaries have dropped to 15th after just two wins in 15 league matches.

"Everyone keeps talking about looking over your shoulder, and looking down," the 25-year-old told BBC Radio Norfolk.

"But if you get a win or two, you're 10th in the table. Rather than looking over your shoulder, I prefer to be looking up."

Howson said West Ham have shown how a short run of good form can rapidly improve a team's position in the table.

The Hammers climbed from 18th in the Premier League at the end of January to 10th by the end of February after a run of victories.

"If you look at the likes of West Ham, in January they hadn't won in however many, then they go and win four on the bounce," Howson said.

"That's how football can be, it can change, and sometimes you just need something to go in your favour.

"It's a good group in there, nothing will affect us, we'll keep on doing the best we can and I'm sure it will turn around."

Norwich welcome Sunderland to Carrow Road on Saturday, with the visitors sitting 18th in the Premier League.

However, the Black Cats are just four points behind Norwich having played three games fewer.

Howson denied the proximity of the clubs in the table gave the game increased importance.

"You only win three points so it's no different to any other game to me," he said.

"There's still games after that and whatever the outcome next Saturday that isn't going to be the bottom line.

"[It's not] until that final whistle goes on the the last game of the season that you can put a bottom line to it."