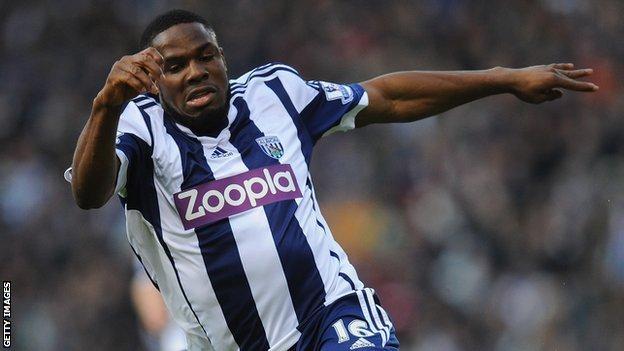 Nigeria striker Victor Anichebe insists he has not been asked to return to the national side for the World Cup.

The 25-year-old recently put his international career on hold to "manage his body" and to focus on his club.

But Anichebe told BBC Sport: "I haven't spoken to anybody, that goes from the federation to Stephen Keshi himself."

However, he has not ruled out a return to the fold - and he realises the tournament in Brazil may be his last chance to play at the biggest event in football.

"We will see what happens," said Anichebe, who missed out on selection for South Africa 2010. "Right now I'm playing well, feeling fit, strong and helping my team in the situation we are currently in at the moment.

"If I continue to play well from now to the end of the season then we can take it from there.

"I'm grateful that the coach says he is willing to give me a chance, but I think everybody in Nigeria and around the world knows what I can do and capable of.

"The Premier League is watched around the world so it's easy to see what qualities I can bring to the team.

"If not, there are so many other talented Nigerians around the world that would also love the opportunity to represent their country and play in such a prestigious tournament.

"Yes the World Cup only comes once in every four years and it could be my last opportunity - this is something I'm aware of but I haven't spoken to anybody."

He scored on his debut in a 2-0 win over South Africa to help them reach the 2008 Olympics and was then part of the squad that went on to win silver in Beijing.

In his last appearance for the Super Eagles, a 2-0 win over Madagascar in 2011, he suffered a groin problem. Since then he has opted to concentrate on securing regular first-team football at club level.

That decision has led to criticism from some Nigeria supporters but Anichebe rejects any suggestions he does not care about the country.

"I believe I have some good fans in Nigeria that understood and respected my decision to concentrate on getting fit," he said.

"Some players would have just joined the team, not in great condition but for personal gains. I see the bigger picture in things and it's worked for me.

"Nigeria also won the Nations Cup in 2013 and we got to discover other talents that we may not have got the chance to see.

"So any 'fan' that sees me as unpatriotic is just being unfair because if you check the meaning of patriotism it's the love and devotion you show for your country and I love Nigeria.

"I grew up in England but only see myself as a Nigerian and my long-term objective is a lot bigger than this because I hope to give back to my country.

"Football has given me a great platform but my aim is to help young people in Nigeria, so to say I'm not patriotic is ludicrous."

Anichebe is also keen to make it clear he did not decide to withdraw from international duty because he failed to make the World Cup squad four years ago.

"I must commend the players that got Nigeria to this year's World Cup because I did the same thing a few years ago," he said.

"But then I played a friendly game and got man of the match in nearly every newspaper in Nigeria yet I still didn't go to South Africa, which was a shame and a great disappointment.

"But I held no grudges and still returned to play for Nigeria before I suffered an injury.

"What happened in 2010 showed that some decisions obviously have no logic but that's life at times.

"The break has helped me to stay fit and enabled Nigeria the chance to discover other players."