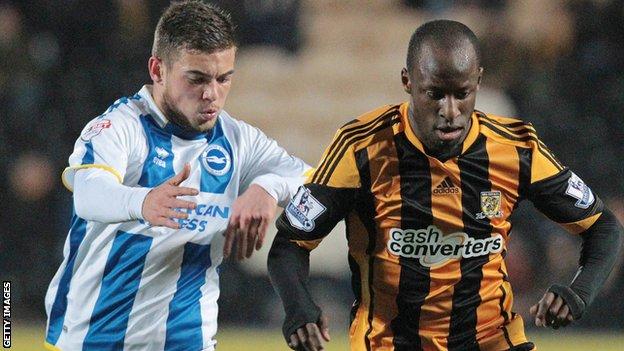 Brighton midfielder Jake Forster-Caskey says his loan spell at Oxford United last season has helped him establish himself in the first team at the Amex.

This season the 19-year-old has scored two goals in 25 appearances.

"It's been amazing for me really. I can only thank the coaching staff and Oscar [Garcia, Albion head coach] for putting trust in me and playing me," Forster-Caskey told BBC Sussex.

"The loan got me used to playing week in, week out and my body developed."

Forster-Caskey came through the youth ranks at the Championship club and became Brighton's youngest non-wartime player when he made his debut at the age of 16 years and 13 days against Yeovil in May 2010.

After making seven appearances over the following two campaigns he signed a three-year deal with the Sussex side in summer 2012 and went on to play 20 times for Oxford in the first half of last season.

We'd be lying if we said we were not keeping an eye on the table. We know where we are and what we have got to do

The son of former Tottenham and Reading midfielder Darren Caskey and the step-son of ex-Reading and Albion striker Nicky Forster, Forster-Caskey is one of a number of home-grown players who have seen action for the Seagulls this season.

Midfielder Rohan Ince has featured 28 times in total since his debut in August, centre-back Lewis Dunk has played in the FA Cup and Brighton's last three league games while winger Solly March has been a regular substitute since the turn of the year.

"There is a nice little group of us that seem to be developing at the same time," Forster-Caskey said.

"We have got experienced players in the dressing room and they keep our feet on the ground and keep us in check when we are running around like mad men.

"It is really nice to be playing alongside friends."

Forster-Caskey helped Brighton to back-to-back wins against QPR on Tuesday and Bolton on Saturday, which have lifted Brighton to one point off the play-off places with a game in hand.

"We'd be lying if we said we were not keeping an eye on the table," he said. "We know where we are and what we have got to do.

"We need to keep winning games and putting the pressure on the teams above us.

"There is a great confidence flying through the changing room and we have got a good bit of momentum. We have got some tough games coming up but it is a crucial part of the season."