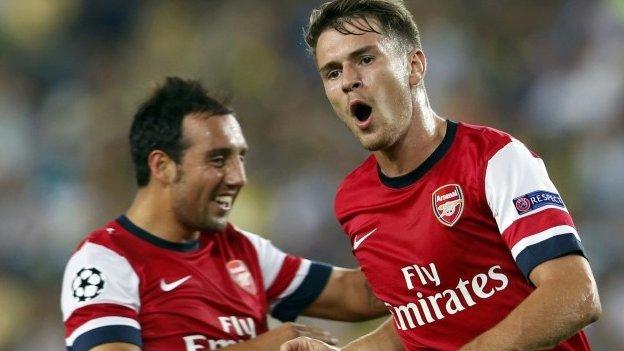 Ramsey, 23, who scored 13 goals in 27 appearances before picking up a thigh injury in December, is expected to stay at the club until 2019.

Cazorla, 29, was voted Arsenal player of the year last season, is believed to have extended his deal until 2017.

"Cazorla and Ramsey are key players for us. This news is a boost to the whole club," said Arsenal boss Arsene Wenger.

Gedion Zelalem, 17, has also been given a new deal follow his arrival at the club in January 2013.

Wales international Ramsey joined the club in 2008 from Cardiff in a £5m move. Since then, he has gone on to make 177 appearances for the club.

"I've been here for six years and I'm so happy," said Ramsey.

"I think we've shown so far this season what we're all about and the direction that this club wants to go in. I want to be a part of that, and to be a part of something special at Arsenal."

Spain international Cazorla joined from Malaga in August 2012 for an undisclosed fee and last term made 49 appearances - more than any other Arsenal player.

"I have had a great time with the club since joining nearly two years ago, and I think that we can be a big player in competing for the top trophies in years to come and that's important for me," said Cazorla.

Zelalem, a German youth international, made his competitive debut in the 4-0 win over Coventry in January.

Wenger said: "Gedion is very young, but he has shown already that he has fantastic promise. We all look forward to his development with us."