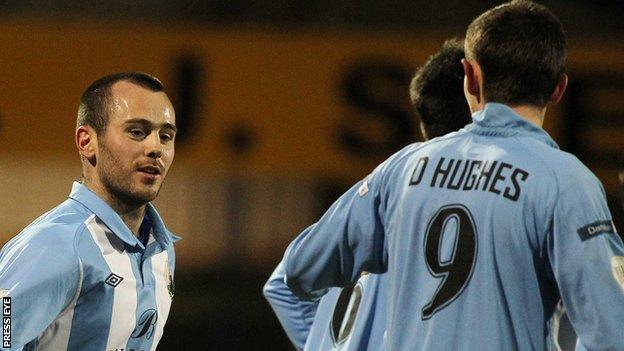 Warrenpoint Town moved out of the bottom two in the Irish Premiership with Stephen Hughes scoring both goals in their narrow home win over Glenavon.

Hughes netted a 15th-minute close-range finish at the far post after brother Daniel had played the ball across.

Brian McCaul equalised for Glenavon on 50 minutes but Hughes got the winner midway through the second half.

The win ended a run of five defeats for Warrenpoint and lifts them above Ballinamallard on goal difference.

Glenavon had already been assured of finishing in the top six ahead of the Premiership split, although victory at Stangmore Park would have taken them above Glentoran and into fifth.

Warrenpoint's eagerness to end their dismal run of defeats showed early on and they made the breakthrough through Stephen Hughes.

He had a simple tap-in after Glenavon defender Kris Lindsay's clearance struck Daniel Hughes who then played a square ball across.

Town keeper Jonathan Parr kept his side in front by pulling off a splendid save in tipping over Brian McCaul's dipping volley.

But McCaul was not to be denied and he levelled matters five minutes into the second half with his first goal since returning to Mourneview Park from Linfield.

Striker Guy Bates played the ball through and midfielder McCaul struck a shot from just outside the penalty area which keeper Parr could only touch into the net.

Hughes got the winner in the 66th minute, scoring from close-range after a pass from another brother, Mark.