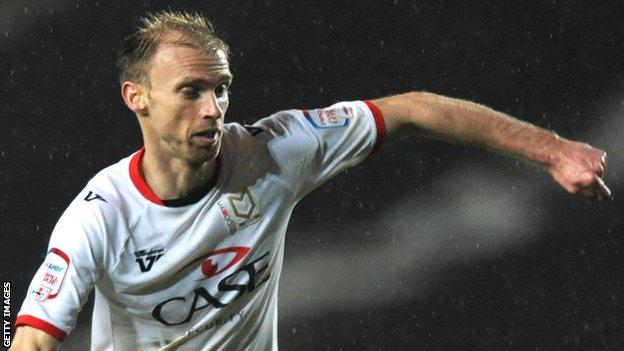 Cambridge United have signed MK Dons midfielder Luke Chadwick - a U's fan - on loan until the end of the season.

The 33-year-old will go straight into the squad for Tuesday evening's match against Welling, but is not eligible for Sunday's FA Trophy final.

Director of football Jez George said the Cambridge-born winger had called saying he wanted to play for the club.

"People may say this is too good to be true but Luke honestly loves Cambridge United Football Club," he said.

"It's a very unusual signing because it's very rare that you get a League One footballer that approaches us and tells us that it's his ambition to play for Cambridge United. That's what's happened on this occasion.

"He's a fan of Cambridge United and he's just said to me 'it's a day that makes me and my family really proud that I'm going to get the opportunity to play for the club'."

Chadwick started his professional career at Manchester United in 1999, where he helped the club win the Premier League title in 2000 and 2001, and made a number of Champions League appearances.

Spells at Reading, Burnley, West Ham and Stoke followed before he signed for MK Dons in January 2009, going on to make 238 appearances.

George, who has worked extensively in youth football around the Cambridge area, said he knew Chadwick before he got his big break at Old Trafford.

"I remember him being a lad who played in the Cambridge schoolboys team, and went to Manchester United as a young lad," he told BBC Radio Cambridgeshire.

"We all know what he's about as a player but until the last two or three weeks we didn't know too much about him as a character.

George admitted the wages of a League One player would normally be beyond the Cambridge United budget, but said the player's determination to sign and the cooperation of MK Dons had made a "unique" situation possible.

"As far as he's concerned he comes in as part of a squad and is desperate to see us promoted because he's a fan of the club.

"It's important that everyone knows it's come about because of Luke Chadwick. We haven't scouted him.

"It's financially something we wouldn't be able to do in a million years if it wasn't for the fact the circumstances dictated it was possible."