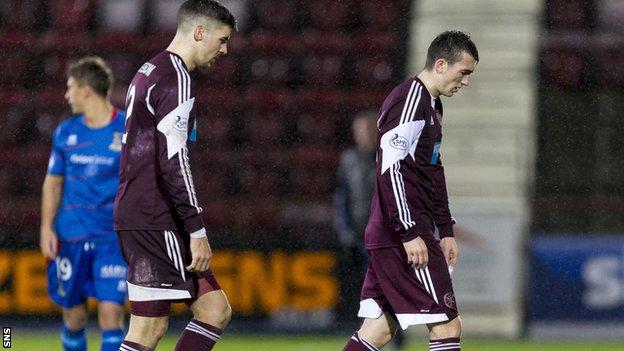 Hearts have long known that they are taking the drop from the Scottish Premiership.

But now they face the unpalatable possibility that confirmation of their relegation may come with the visit of Edinburgh rivals Hibernian to Tynecastle at the end of March.

It would be a cruel torment in a painful season for the administration-hit club.

Despite a positive opening to the campaign, Hearts were always up against it, kicking off with a 15-point penalty and a signing embargo.

The worst goal difference belongs to Livingston in 2005-06, when they lost 54 goals more than they scored

And, with only nine league games to go, they remain firmly rooted to the bottom of the pile, 21 points adrift of 11th place.

While relegation was likely before a ball was kicked, will Hearts be taking some unwanted records with them when they exit the top flight?

A promising start from Gary Locke's callow side had fans dreaming of a great escape as seven points were accrued from the first four games and it looked as though Hearts had the potential to make life interesting at the bottom end of the table.

However, that early optimism quickly faded, with only six points taken from a possible 42 from September to December, without a single win in seven home fixtures.

With only one point from a possible 15 to close out the opening half of the season, Hearts were flirting with the lowest points tally since the top division was rebranded in 1998.

In season 2005-06, Livingston were relegated with a mere 18 points. Two seasons later, Gretna finished bottom with a record-setting low of 13 points. On the field, Gretna actually earned 23 points, losing 10 points as the penalty for going into administration.

After taking 12 points from their opening 19 matches in 2005-06, Livingston went into meltdown, losing 17 of their 19 matches in the second half of the season.

Manager Paul Lambert left in February 2006 after seven consecutive defeats and his replacement, John Robertson, could not prevent relegation.

Gretna actually had a better second half of the season in terms of points and those were secured against a backdrop of unrest caused by unpaid wages and the resignation of manager Davie Irons.

However, administration led to them being reduced to six points after 28 games and, with a win on the final day against Hearts, they finished with an official count of 13.

As 2014 started with a derby defeat at Easter Road, Hearts needed more than 16 points to avoid the lowest-ever tally.

A win at Ross County on 25 January finally took Hearts into positive points and another first quickly followed - a come-from-behind win over St Mirren.

Since then, however, Hearts have taken only one point from four Premiership fixtures and now require eight points from their final matches to get past Gretna's unwanted record.

The worst goal difference belongs to Livingston in 2005-06. They lost 54 goals more than they scored, with 25 for and 79 against.

Surprisingly, the 25 goals scored in 38 games is not the lowest number scored in a campaign. In 2010-11, St Johnstone managed only 23 goals but finished eighth.

With a goal difference of -20 after 19 games, Hearts were in a better position than both Livingston and Gretna at the halfway stage and, with 29 games gone, the men in maroon have scored 25 goals and have conceded 54. 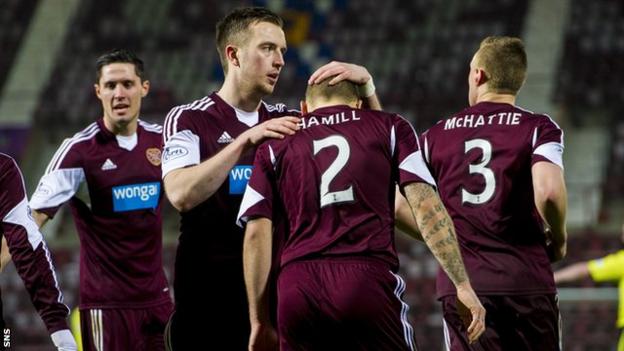 Hearts have had to play a campaign with what at times has resembled little more than an Under-20s side and still the club remains in administration as courtrooms in Lithuania wrangle over the financial mess left behind by former Tynecastle owner Vladimir Romanov.

These are simply the cold, hard stats when it comes to finishing bottom.