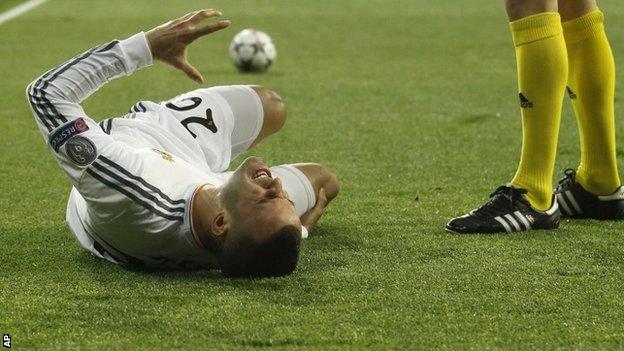 Real Madrid forward Jese is set to be out for the rest of the season after suffering cruciate damage to his right knee in the 3-1 win over Schalke.

The 21-year-old Spaniard was knocked to the ground and landed awkwardly following a challenge by Schalke defender Sead Kolasinac.

"We are sad and it has affected us a lot - we have to stay positive," said Real coach Carlo Ancelotti.

"We will help him through it and wait for him to come back next season."

"But this is football and players suffer injuries at times during their careers."

Jese has scored eight goals in 31 Real Madrid appearances this season and Spain coach Vicente Del Bosque recently stated that he had a chance of making the World Cup squad.

The youngster's injury resulted in world-record signing Gareth Bale entering the field earlier than expected. The Welshman provided two assists, for Cristiano Ronaldo and Alvaro Morata, as the nine-time European champions booked their place in the Champions League quarter-finals with a 9-2 aggregate victory.

"It's good for Spanish football to have three teams in the quarter-finals and shows it is in good health," Ancelotti added.

His side's next game is at home to Barcelona on Sunday in a match which could help decide the Spanish title. Leaders Real are currently four points ahead of the champions.

"We are coming into the Clasico in good form and are very excited about the game. Generally speaking we are full of confidence and motivation," said the former Chelsea boss.

Schalke coach Jens Keller said he was pleased with his side's performance at the Bernabeu, which was a vast improvement on the one they produced in the first leg when they were thrashed 6-1.

"Real Madrid have the quality to turn a chance into a goal in a second," he said.

"The tough thing is that due to two specific mistakes they scored two goals."