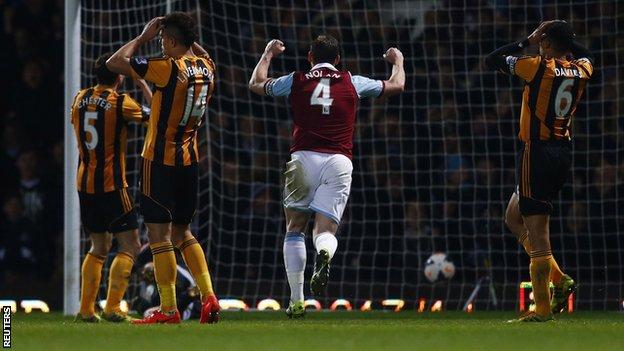 A calamitous James Chester own goal gifted West Ham victory over 10-man Hull and moved them nine points clear of the relegation zone.

Sam Allardyce's side took the lead through Mark Noble's penalty after Hull keeper Allan McGregor was sent off for bringing down Mohamed Diame.

Allan McGregor's sending off was his second of the season and Hull City's fourth in the league. The 32-year-old is the first Premier League goalkeeper to be sent off twice in a single season since Maik Taylor in 2003-04.

Tom Huddlestone forced a smart save from Adrian but the home side held on.

The Hammers' inability to push on and make their numerical advantage pay saw their supporters greet the final whistle with boos.

Allardyce cupped his ear to highlight his surprise at the criticism, after his side had ended a run of three league losses, his worst run of defeats since becoming manager in 2011.

His side have lost 17 points from winning positions during the campaign, but despite not creating a clear opening in the second half, they won by the odd goal for the first time this season and leapfrogged Hull to move 11th in the table.

Defeat means Hull remain one short of the 10 victories that manager Steve Bruce has set as a survival target, while West Ham, on 34 points, are four short of the tally Allardyce feels will secure their place in the league.

After early efforts from Stewart Downing and Matthew Taylor, the game's moment of controversy arrived in bizarre circumstance when McGregor clattered Diame.

The Senegal international appeared to control the ball with his hand and referee Mike Dean did not initially penalise McGregor's clumsy challenge - but his assistant Scott Ledger instructed that a penalty should be awarded and a red card issued.

McGregor, who was hurt in the collision, left the field and Mark Noble - an ever-present for the Hammers this season - stepped up to slot to the left of substitute goalkeeper Steve Harper.

The sending off forced a major tactical rethink for Hull, as Alex Bruce - deployed in a rare holding midfield role - was taken off so that Harper could come on, and strikers Nikica Jelavic and Shane Long were kept in attack.

Their bravery was almost rewarded when Tom Huddlestone fired over and Maynor Figueroa forced a save from Adrian with a stinging shot.

And West Ham failed to heed the warning of Hull's late first-half flourish as they allowed Hull to start the second period quickly and Huddlestone's free-kick cannoned off Jelavic and past the helpless Adrian.

The Croatian's fourth league goal of the season makes him the Tigers' top scorer, but hope turned to misery moments later when Chester put into his own net.

The 25-year-old swung at Guy Demel's hopeful cross when under no pressure and diverted the ball in off his knee.

In response, Huddlestone fired a long-range shot which forced Adrian to save and Chester headed over from 12 yards.

The FA Cup semi-finalists could however not muster a clear opening and West Ham, who travel to 18th placed Sunderland on Monday, closed out the win.

For a full gallery of pictures from Wednesday's action, visit the BBC Sport Facebook page.