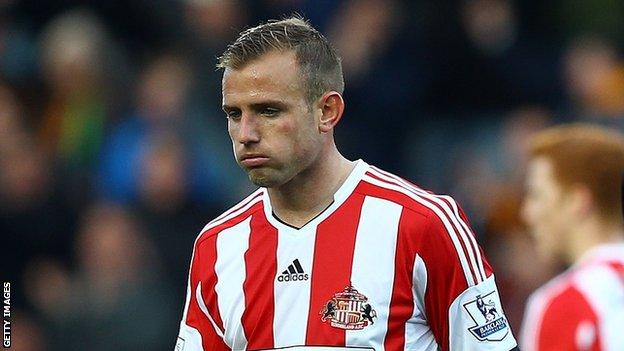 Lee Cattermole has insisted he is happy at Sunderland, claiming he is learning more from Gus Poyet than any other manager in his career.

The midfielder was dropped after making a bad error in the FA Cup quarter-final defeat by Hull City.

But Cattermole said: "I'm learning more about a new approach to the game than in the majority of my career."

In Liam Bridcutt, the gaffer now has another player in the squad who can do the job, but that's football. I have to deal with it, get my head down in training and wait for another opportunity

Speaking to BBC Newcastle, Cattermole continued: "I've told the manager that himself, and if I can keep approaching training and games the right way, there'll probably still be mistakes along the way, but on the whole my performances have been getting better."

Cattermole nearly left the Black Cats during January's transfer window when he was the subject of a £5 million bid from Stoke City.

But Poyet opted to retain the feisty 25-year-old to maintain midfield competition at the Stadium of Light, and Cattermole said he is delighted to still be in his native north east.

"The manager has been great with me since he came and I honestly feel as though I'm on the verge of producing some really good football," Cattermole explained.

"I made a mistake against Hull, but I have to take the positives and on the day I thought I played a good game, helping the team and the four or five new lads who came in against a good side who know their jobs really well.

"In Liam, the gaffer now has another player in the squad who can do the job, but that's football. I have to deal with it, get my head down in training and wait for another opportunity."

He has been sent off seven times in his Premier League career, with only Richard Dunne, Patrick Viera and Duncan Ferguson - each of whom was dismissed eight times when playing in the Premier League - ahead of him.

"There's things I probably haven't helped myself with, on the field, and it's something I'm working on," he said.

"But the most important thing to me at the moment is doing everything I can to help Sunderland stay up.

"We have to keep believing in what we've done since the manager came here, we've been a lot more organised as a team. I'll be ready to come in at any time.

"It would kill me to be sitting on the bench and watching us go into the Championship.

"The most important thing is for us all to get what we want from these remaining 11 games and keep Sunderland Football Club in the Premier League.

"I'm convinced that if we do that then next season could be a really good one for the club and myself."