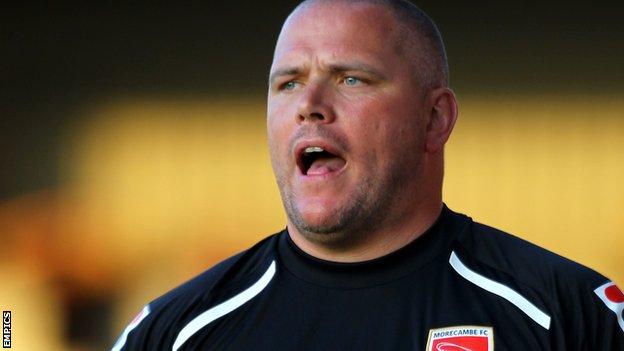 Morecambe manager Jim Bentley has promised to work extensively with his players on defending set-pieces.

Bentley's side conceded twice from corners in a 5-1 defeat at local rivals Accrington Stanley on Tuesday.

"We just can't defend set-plays at the moment. We're lacking something - we need a centre-half who can head the ball," he told BBC Radio Lancashire.

"It's baffling. It's every week that we look scared at set-plays and they [Accrington] took full advantage."

The result keeps Morecambe in mid-table, nine points clear of the relegation zone in League Two.

After ending a wait of more than two months for a league victory, Morecambe claimed successive home wins against Southend and Newport and drew at Dagenham to move back into the top half of the table.

However, conceding five goals in a match for the second time in five outings has increased concerns that the injury-hit Shrimps could yet be fighting against relegation in the final weeks of the campaign.

"It does your head in because you think you've turned the corner, and then you think 'if you can beat Accrington, you'll be two points off the play-offs'.

"But I must be kidding myself and I must be believing in them too much. We've been pulled right back into it now and we've got a battle on," Bentley said.

Morecambe are likely to be without veteran midfielder Stewart Drummond for the rest of the season because of a fractured toe, while Andy Parrish is between two and four weeks away from returning from a knee problem.