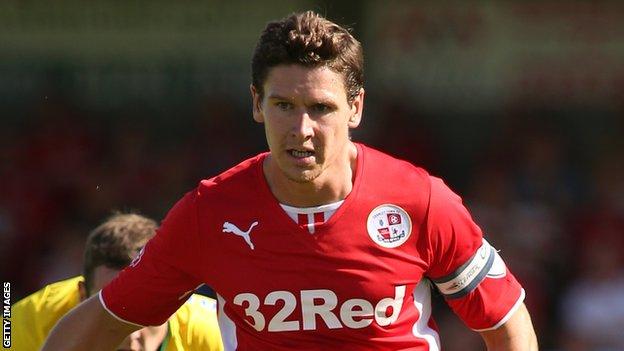 Crawley captain Josh Simpson says John Gregory has re-energised the side since his appointment as manager in December.

The Reds have only lost two of 14 League One matches under Gregory and beat leaders Wolves 2-1 on Tuesday.

"Since the gaffer has come in he has upped the standards," 27-year-old midfielder Simpson told BBC Sussex.

"He has done so well since he come in and he is very enthusiastic. He has lifted everyone and I think that is what we needed."

He added: "I can only speak highly of him."

Gregory took charge of the West Sussex club on 3 December following the dismissal of Richie Barker the previous week.

The 59-year-old former Aston Villa manager had not managed in England since leaving QPR in 2007.

Crawley slipped to one point above the relegation zone after five successive postponements in January and February, but they kept their faint hopes of reaching the play-offs alive after coming from behind to beat Wolves at home.

The Reds are now 12 points behind sixth-placed Peterborough with three games in hand.

"We have gone through a little stage where we haven't picked up as many points as we would have liked to in the last few games," Simpson said.

"The first thing the gaffer told us before the game was to stay in the game. We went 1-0 down but we kept our heads and stayed composed.

"We got the equaliser and then scored at an important time just after that. The lads put in a good shift.

"It is definitely one of the best games we have seen here and it shows where the club is heading."