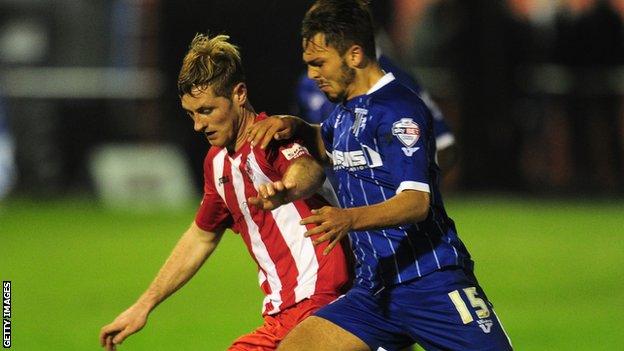 Gillingham manager Peter Taylor has tipped midfielder Bradley Dack to be a regular in the starting XI next season.

The 20-year-old academy graduate has made 25 appearances for the Gills so far this season.

"I am very impressed with Bradley. I have no doubt Bradley will be a very, very good player for us," Taylor told BBC Radio Kent.

"For me, him and Jake [Hessenthaler] will be absolutely nailed-on starters next season, whoever is in charge."

People have got to realise we have got a young boy here who does absolutely everything. He needs calming down to be even more effective in his position

Dack made his debut for the Kent club in the League Cup last season and went on to feature 20 times under former Gills manager Martin Allen, as well as having a one-month loan spell at Braintree.

The youngster was initially used as a substitute by Taylor after the one-time England boss took charge at Priestfield in October. He was a regular in February but has not featured since the defeat at Bristol City on 1 March.

Taylor is keen that Dack can continue developing as a footballer and not suffer burn-out.

"When I first got here I just thought he was a substitute who would come off the bench and put in good performances," Taylor added.

"He is more than that and definitely better than that. He is a player that can start matches and play 90 minutes at the same energy he has got in the first minute.

"People will say 'hang on a minute why are you saying that?' as he is not playing at the minute.

"People have got to realise we have got a young boy here who does absolutely everything.

"He runs all over the place and needs calming down to be even more effective in his position."